The research presented here concerns methodological issues surrounding Zeta, a measure of distinctiveness or keyness initially proposed by John Burrows (2007). Such measures are used to identify features (e.g. words) that are characteristic of one group of texts in comparison to another (Scott 1997), a fundamental task that many standard tools support, e.g. WordCruncher (Scott 1997), AntConc (Anthony 2005), TXM (Heiden et al. 2012) or stylo (Eder et al. 2016). Widely used methods include the log-likelihood ratio (where observed frequencies are compared to expected frequencies; see Rayson and Garside 2000) and Welch’s t-test (where two frequency distributions are compared; see Ruxton 2006). Zeta, by contrast, is based on a comparison of the degrees of dispersion of features (see Lyne 1985, Gries 2008). Zeta appeals to the Digital Literary Studies community because it is mathematically simple and has a built-in preference for highly interpretable content words. Indeed, Zeta has been successfully applied to various issues in literary history (e.g. Craig & Kinney 2009, Hoover 2010, Schöch 2018). However, its statistical properties are not well understood, as important work on evaluating measures of distinctiveness (Kilgariff 2004, Lijfijt et al. 2014) has not included Zeta. Therefore, we submit two key aspects of Zeta to exploration and evaluation: (a) variations in the way Zeta is calculated and (b) variations of key parameters. We gain a more precise understanding of how Zeta works and propose a new variant, “log2-Zeta”, that shows more stable behavior for different parameters than Burrows’ Zeta.

Zeta is calculated by comparing two groups of texts (G1 and G2). From each text in each group, a sample of n segments of fixed size with m word tokens is taken. For each term (t) in the vocabulary (e.g., consisting of lemmatized words), the segment proportions (sp) in each group are calculated, i.e. the proportion of segments in which this term appears at least once (binarization). Zeta of t results from subtracting the two segment proportions:

From this formalization, we can derive several variants of Zeta: applying division instead of subtraction; using relative frequencies (rf) instead of segment proportions (sp); and applying a log-transformation to the values rf and sp instead of using them directly. This results in eight variants of Zeta (Table 1).

Table 1: The eight variants of Zeta with their labels; “sd0” corresponds to Burrows’ Zeta.

The formalization also points to two major parameters of Zeta: segment sampling strategy (using all possible consecutive segments, or sampling n segments per text to overcome text length imbalances) and segment size (segments with m tokens, influencing the granularity of the dispersion measure). We expect the segment size to be of particular importance, as choosing extreme values affects the calculations very strongly: using a segment size of 1 token is equivalent to relative term frequencies; using unsegmented texts is equivalent to document frequencies. Because Burrows (2007) gives no theoretical justification for his particular formulation of Zeta, a systematic exploration and evaluation is called for.

For reasons of space, we only report results for the Spanish novels. Texts, metadata, code, results and figures are available on Github:

To obtain a better understanding of Zeta and its variants, we first visually explore the relation between segment size and the resulting zeta scores. We expect both Zeta variants and segment size to have visible consequences in this setting. Secondly, we evaluate the distinctiveness of words selected by different Zeta variants by using the highest ranked words as features in a classification task for distinguishing texts into two previously defined classes. This captures the degree to which the different Zeta variants and parameters identify words distinctive of these two classes. Note that we calculate Zeta scores from the complete set of documents. While this is not valid for a real-world classification task, it allows us to better judge the level of distinctiveness of the selected words. We expect better performance in the classification task with some of the new variants, compared to the classic “Burrows Zeta” (sd0). We also expect extreme segment lengths to significantly impact classification performance. We primarily aim at a methodological contribution here, so we do not attempt include a discussion of our results from a literary perspective (but see Schöch 2018 for such a contribution).

First, we take a closer look at the relationship between overall frequency and Zeta scores as it evolves with increasing segment size. 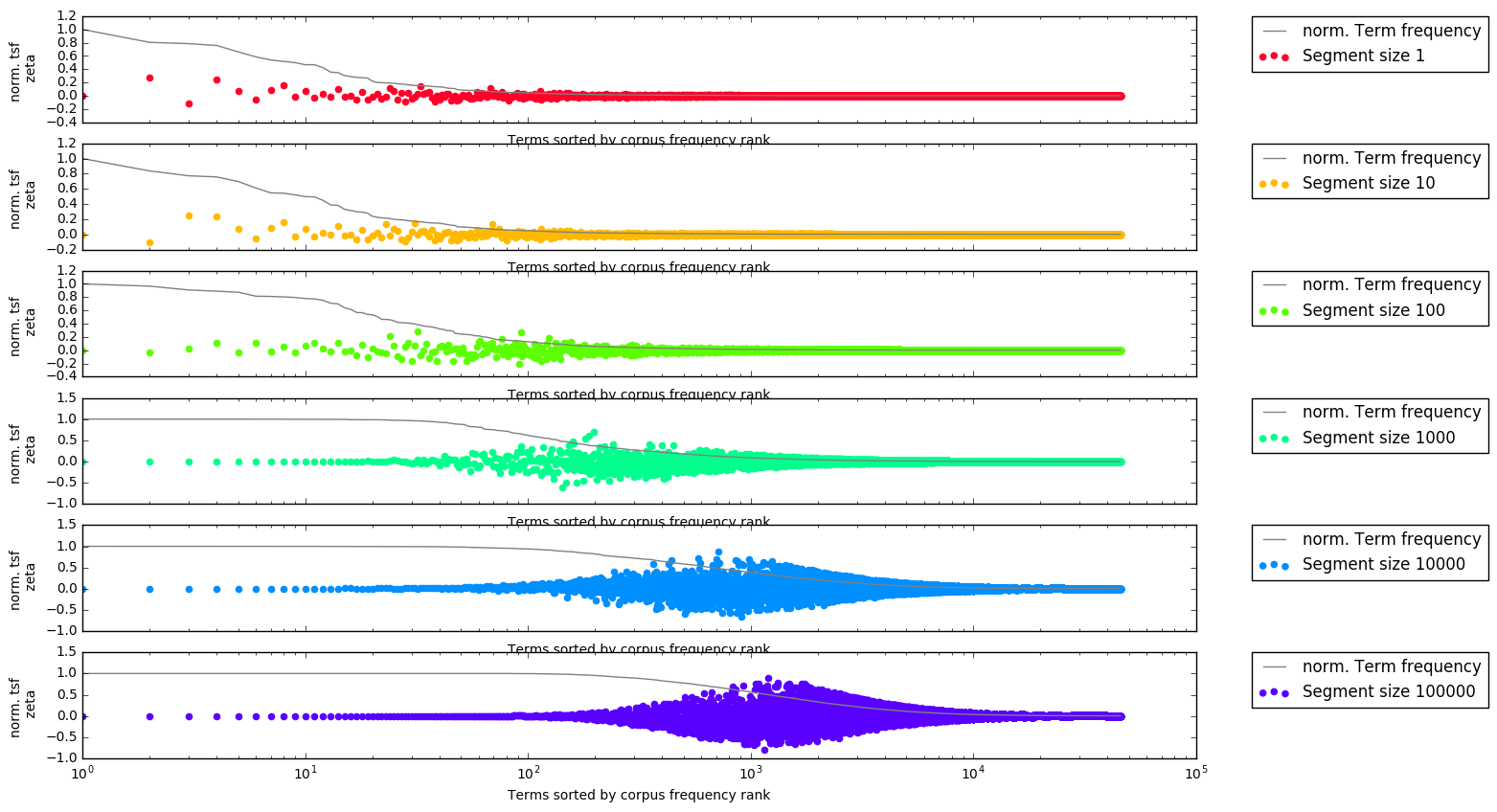 Figure 1. Distribution of Burrows Zeta (sd0) scores depending on segment size. Each dot is one word, ordered by descending frequency. The x-axis is log-scaled.

Additionally, we explore the influence of segment length and Zeta variant on the relation between segment proportions and zeta scores. 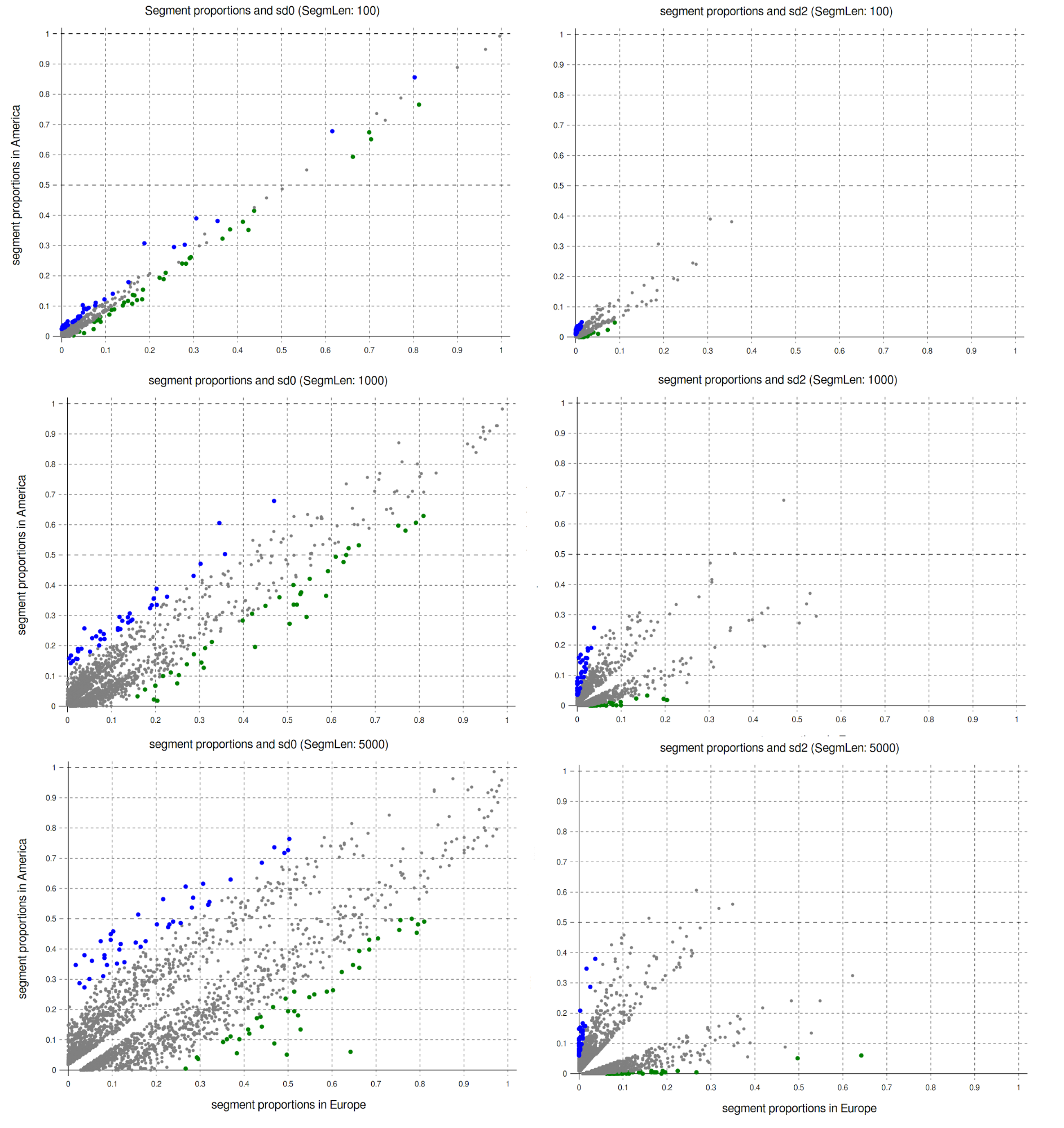 6.
Evaluation of Zeta variants and parameters

Evaluating the performance of Zeta variants and different parameters is non-trivial, because it is impossible to define a human-annotated gold standard for distinctive words. Therefore, we use a classification task (with a Linear-SVM classifier and 3-fold cross-validation) for evaluation (the Spanish novels have to be classified by their continent of origin: America and Europe). The baseline of classification performance is F1=0.49 on average across all conditions and has been obtained using the top-80 most frequent words weighted with TF-IDF (see Robertson 2004). 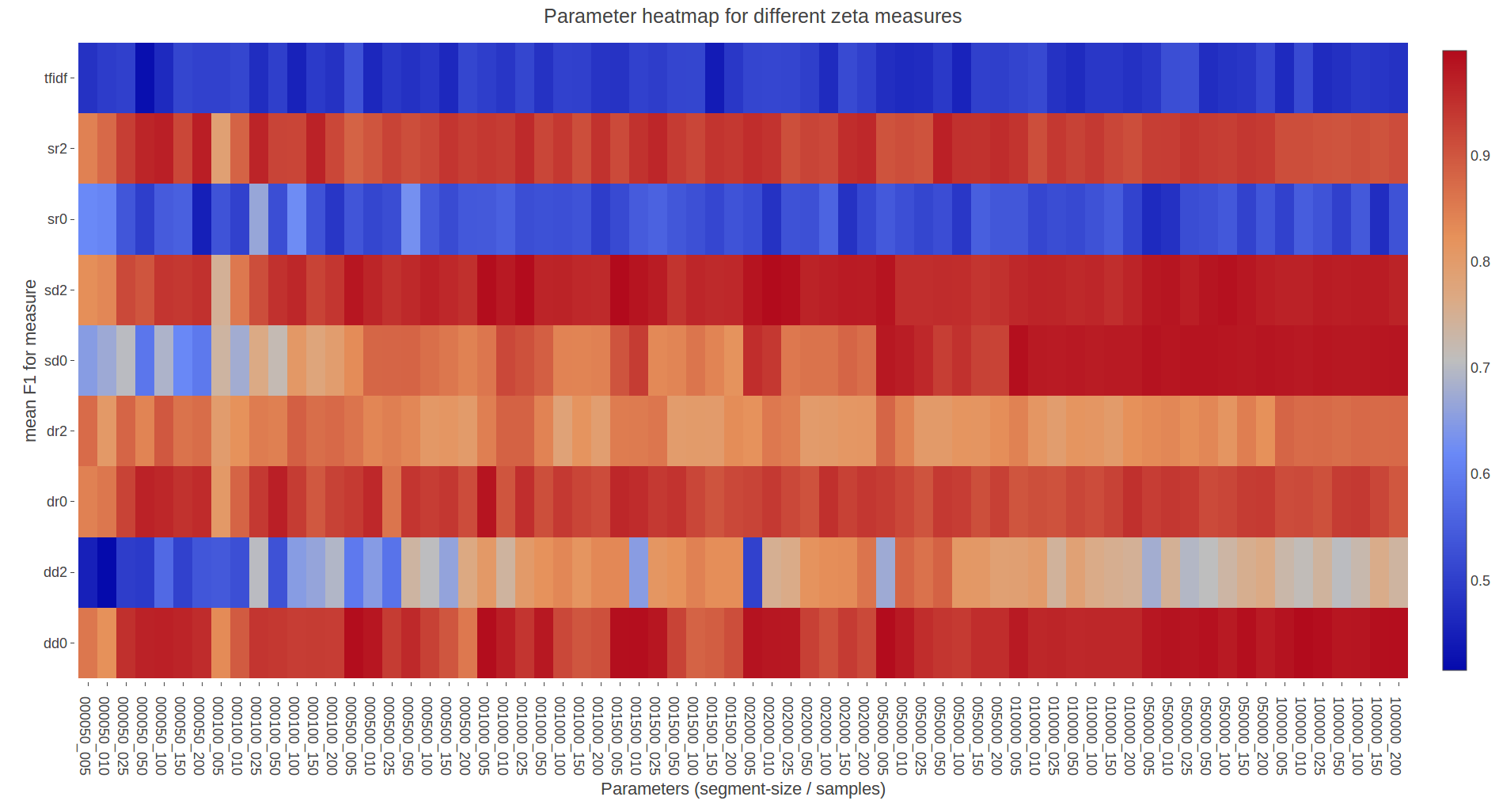 Figure 3. Classification performance depending on Zeta variant, segment size and number of segment-samples. We report mean F1-score over 15×3 folds.

Figure 3 shows that, as expected, most Zeta variants outperform the baseline. Segment size also influences performance: Burrows Zeta (“sd0”) performs particularly poorly with small segments (50, 100) and particularly well with large segments (>10000). Contrary to our expectation, large segment sizes do not generally have a negative impact on performance. The log2-Zeta variant (“sd2”) performs better than Burrows’ Zeta and is more robust with respect to segment size. In addition, we evaluate the parameter sampling size (number of segments randomly sampled for each document). For Burrows’ Zeta (“sd0”), we observe a better classification performance for small samples.

While improved performance and robustness are welcome, another important characteristic of Burrows’ Zeta should not be forgotten, namely the high interpretability of the most distinctive words it identifies. The question is whether the gain in performance obtained with log2-Zeta comes at the expense of interpretability of the most distinctive words. Currently, we can merely offer some preliminary observations on this issue: First, the interpretability of distinctive words could be operationalized in a first approximation as the proportion of content words (nouns, verbs and adjectives) in the list of the most distinctive words, as opposed to function words and named entities. Second, segment size and Zeta variant both appear to influence the types of words Zeta that determines to be distinctive: for example, very small segment sizes favor highly frequent function words, while very large segment sizes lead to place and person names taking up a considerable space in the word list. Also, some Zeta variants, including log2-Zeta, produce lists of words containing high proportions of place and person names even at intermediate segment lengths, that is wordlists that are less interpretable (see annex). These preliminary observations point to a possible trade-off between performance and interpretability that requires further, systematic investigation.

Our experiments have allowed us to gain a much more detailed understanding of how Zeta works, mathematically and empirically. Additionally, we have identified at least one Zeta variant (“log2-Zeta”) that selects more distinctive words with regard to our classification task and is more robust against variation in segment length than Burrows Zeta.

As future work, we plan to conduct an investigation into the notion of “interpretability” and its relation to classification performance. Also, we plan to build an interactive visualization for our results to support a dynamic exploration of Zeta variants, key parameters and their influence on classification accuracy and distinctive words obtained. A larger agenda item is the evaluation of a substantial number of measures of distinctiveness, including Zeta, in a common framework.

For reasons of space, the wordlist annex can be found at: