Through different projects, the iArtHis_Lab (www.iarthislab.es) research group has been analyzing the mechanisms for the production and distribution of cultural information on the Internet since 2015. Furthermore, this research group has considered the possibilities of reusing this information in the form of structured data to generate new knowledge and value through computational processing techniques. The interest of this research is derived from two main motivations. First, there is the need to examine and unveil the informational gaps that the digital society is producing in the cultural field. Secondly, there is the need to evaluate the potential connections between such inequalities and the development of the so-called creative economy.

The creative economy has been defined as the role played by artistic creation, creative sectors and cultural institutions in the articulation of new production models that catalyze the generation of wealth, quality of life and social welfare (European Commission, 2010 UNESCO, 2013, Unctad, 2010). According to this understanding, it seems evident that the mechanisms for the production and distribution of cultural information are closely related to the possibilities of its promotion and development, since they are able to mobilize the flow of people and communities to certain locations

, to highlight the distributed cultural heritage and so on (Casacuberta et al., 2008). Therefore, our starting point is the assumption that the digital practices associated with the production and distribution of cultural information are part of the systemic and structural factors that must be taken into consideration when evaluating the possibilities of certain territories to project their creative potential and add value to their own cultural richness.

Examining this scenario from a local perspective has been previously proposed by UNESCO in its
Report for the Creative Economy, the UNDP and other authors (for example, O’Connor, 2008 and Florida et al., 2008). This is one of the objectives of the research project
Data Methodologies Applied to the Analysis of Art Exhibitions for the Development of the Creative Economy

, which focuses its attention on the region of Andalusia located in the south of Spain and on the subsector of the exhibition activity. The exhibitions represent a key component of the creative economy as they are a first-order element in the promotion of socio-cultural and economic dynamics in the territories. Furthermore, they favor the valuation of creativity as an expression of territorial and cultural diversity. Within this research framework, this paper will focus on the issues related to the inequalities and imbalances detected with respect to the digital presence and informational/communicational practices (recording, documentation, curation, dissemination of contents) associated with the institutions and organizations holding exhibitions in the Andalusian cultural system.

To undertake this research, specific work methodologies and technological devices were developed, which allow us to analyze these aspects from different perspectives. In particular, a repository of the structured and semantically enriched data related to all of the cultural institutions and organizations located in Andalusia holding exhibitions since 2000 was built. This repository is accessible through the Expofinder system (
www.expofinder.es). Currently, the corpus size is 1,917 institutions and 12,414 metadata, with an average of 12.98 metadata per institution.

The designed methodology for the analysis combines a double evaluation system with quantitative and qualitative analysis, which employ different diagnostic indicators to measure the two types of variables mentioned: digital presence and informational/communication practices associated with the recording, documentation and dissemination of cultural-exhibition activities.

To measure the digital presence of the cultural institutions in the whole Andalusian region, we have used the number and distribution of the URIs (information included in the Expofinder data model) associated with these cultural institutions as a main indicator, which function as information sources of their exhibition activities. We chose to use URI as an indicator instead of the webpage, which has been mostly used in the traditional approach of this type of analysis, as this parameter not only allows us to quantify the digital presence of cultural entities (according to the number of URIs), but also to project a prospective vision about their potential to distribute cultural information in the digital space

On the other hand, the results of previous projects have demonstrated that cultural information, especially the information related to art exhibitions, is heterogeneous, discontinuous, unstructured and dispersed (Rodríguez Ortega, 2016, Rodríguez Ortega, in press). Thus, we will complement this analysis with the qualitative evaluation of the information systems used by cultural institutions to record and document their exhibition activities in accordance with an analysis model developed ad hoc for this project.

This valuation model integrates the traditional approaches used in the analysis of the digital communication of cultural institutions and organizations (factors inherent to the webpage, such as the usability, design, navigation, presence in RRSS, etc.), although this model also focuses its attention on the two dimensions that are more scarcely taken into account until now: (a) the type and degree of structuring of the information about art exhibition and its flow dynamics; and (b) the digital practices related to the production and communication of the cultural information associated with each type of cultural organization analyzed, which are shaped by very diverse interests, infrastructures, objectives and actors. In the first case, the evaluation is performed using a measurement system based on a qualitative indicator, which is being carried out by peer reviewers. The results of this measurement system were expressed in a data matrix. The second case is conducted according to the Latourian approach (Latour, 2007). This analysis is based on a direct interaction with the actors involved through surveys and interviews. These latter results are provided as the variants of singularity that contextualize the former data.

The analysis of all these data allow us to obtain an accurate picture of the degree of digital presence of cultural institutions and organizations in Andalusia. Furthermore, we have been able to visualize the diversity of the digital practices associated with the production and dissemination of art exhibition activities. The results mainly reveal that both variables constitute one of the problems and weaknesses of the cultural system of the region.

As an example of the results that will be shown during the presentation, Figure 1 shows the magnitude of the black hole that characterizes the region of Andalusia as there are cultural institutions that do not have any type of web source or have a high precariousness.

Figure 1. Dimensions of the “black hole”, which exceeds the space occupied by web sources. Likewise, it is observed that the weakest point is the scarce use of RSS feeds, which is significant considering that they are more efficient in the process of distributing information by digital means due to being highly structured.

By combining the geolocation layers of institutions and web sources (as rendered in the map of Figure 2), we also observed that the greatest number of entities without web sources are found in the areas peripheral to the provincial capitals. 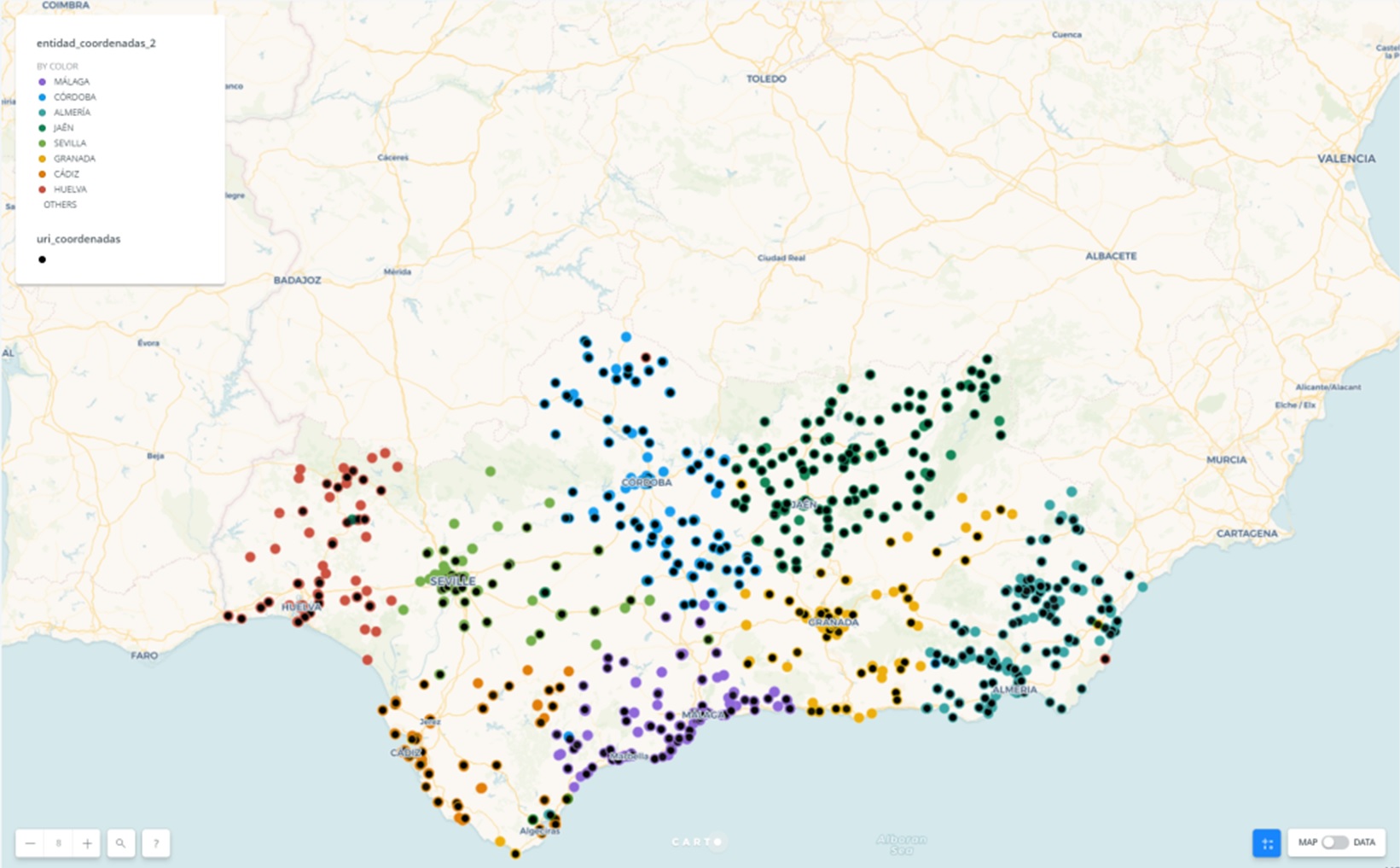 By the time of the presentation at DH2018, these results will be completed and other statistical and geospatial results will be collected, based on the correlation of demographic, economic, cultural and social data. Furthermore, they will be connected with the results of the qualitative evaluation of the information systems and digital practices.

The discussion will delve into the interpretive keys that underlie the observed trends. In general terms, the inquiry will be guided by the following questions: given that there is an association of the degree of digital presence with the size of the cities and as their location in the regional and provincial hierarchy, what is the incidence of public policies and cultural strategy programs endorsed by the government of each city in the configuration of this scenario? In what way do the policies aimed at promoting certain territories within the framework of the development of the creative economy generate new territorial peripheries by concentrating these efforts in certain contexts? Are there significant differences between public and private institutions/organizations?

According to the information provided by the Ministry of Education, Culture and Sport of the Government of Spain, 14.7% (Spanish) and 12.6% (foreigners) of the travelers in 2016 were motivated by cultural interests. Likewise, 39.4% of Spanish citizen participated in activities organized by museums, galleries, art centers, etc., which is an increase of 1.5% compared to the previous year.