“Fortitude Flanked with Melody:” Experiments in Music Composition and Performance with Digital Scores

Concert goers are growing accustomed to performers, particularly small ensembles, who bring a tablet computer on stage and place it on the music stand before they begin to play. Perhaps less noticed, a silent tap on the side of a screen, or the nimble pressing of a foot pedal has replaced the rustle of page turning. Notwithstanding an observable increase in the use of digital devices to study and perform music, the transactions between score and performers are only mildly affected: the digital score primarily acts like its paper counterpart: a static, largely reliable instrument for learning and performing a given work of music. The flexibility of the digital medium, as opposed to something fixed on paper, calls for a more modern concept of the score, one that undermines its prescriptiveness by making room for material and features targeted at supporting performers in their interpretation and advocacy of a musical work. What would such a truly digital score look like? And more importantly, what are the critical instruments necessary to understand its impact on performance and music making at large?

Scholarly digital editions, through carefully encoded music notation, are leading the re-definition of the digital music score and are tackling some of these questions, but these publications often take the form of rich websites apt to careful study, but less for performance practice. The role of dynamic digital scores for performance still demands investigation. This paper will present three experiments based on the same technical application, two of which involve newly composed music, that require a performer to use a digital score as it changes its shape based on factors out of the performer’s control.

In these experiments, we use location-based weather data obtained from the web to introduce variation; as a factor that neither the composer or the performer can control, weather data provides a mechanism for driving change in the music notation.

Meteomozart
, the earliest of our experiments, is a dynamic score of Mozart’s Piano Sonata No.13 in B♭ major, K.333/315c. At the time of writing, the score only includes the first theme of the first movement (about 60 measures).
Meteomozart adjusts the score based on the weather at the performer’s location (or at a location set by the user). Different slurs and dynamics are shown, taken from four sources: Mozart’s 1783 manuscript, the first printed edition (1784) and two performing editions by Bartók (1911) and Saint-Saëns (1915). This sonata is often discussed as an example of the lack of clarity in Mozart’s slurring, George Barth, for instance discusses how slurs in the sonata were changed substantially from the autograph manuscript to the first edition, and more dynamics were introduced. In
Meteomozart, certain weather condition (e.g. sunny, cloudy, rainy, etc.), obtained via the Dark Sky API, will change the score to show slurs and dynamics from one of the four sources. For example, Mozart’s autograph comes up in clear weather, while Bartók will show up in stormy weather. While there is no scholarly reason to associate weather conditions with specific editions, the driving idea behind the experiment is to take away some control from the performer, or rather, to make it more obvious that some control is always taken away in a printed edition. Editors typically build an understanding of the historical contingencies that makes one version better than the other; also, it makes sense to provide a clean text that performers can pick up and play. But often there are very good reasons for not making decisions for the performer (Chopin, for example, published versions of his works in three countries all with minor differences, all published around the same time; which one is “correct”?).
Meteomozart presents a slightly unpredictable text instead of a clear one. It is obvious from audio recordings that the same work of music can be performed in more than one way; likewise, this experiment tries to make it obvious that the score may have more than just one “text”. What would happen if performers took control of the variants as opposed to having the weather determining them?

Meteomozart’s software was re-purposed for a collaboration between composer Joseph L. Arkfeld and the digital humanities scholar Raffaele Viglianti. The first experimental composition resulting from this collaboration was a piano piece,

, a modern take on a piano program piece that takes inspiration from weather conditions. Rather than focusing on a specific condition or setting, such as Debussy’s
Jardins sous la pluie, Chance of Weather engages with the weather that is currently affecting the performance environment. The piece invites the outside world into the performance space, which is usually sterile to the elements. If the audience had to walk through a windy and rainy evening to get to a windowless, temperature controlled performance space, they will find that Chance of Weather evokes the gusts and the dampness of their day. Likewise, if they came on a pleasant warm afternoon, the piece will reflect their recent experience.

A second composition,
Blue Bird, deploys this technique with new parameters by setting to music a fragmentary and variant-rich poem by Emily Dickinson. The unfinished and fragmentary state of Dickinson’s late poetry itself provides a point of departure for dynamic notation. Text-setting for a digital dynamic score presents its own unique challenges apart from instrumental music that must be addressed in order for the music to be singable. One of the most directly accessible permutations would be for the text to change between iterations, which would demand a non-traditional text. Dickinson’s text at the heart of
Blue Bird was located on Marta L. Werner’s database
Radical Scatters: Emily Dickinson’s Late Fragments and Related Texts. Spanning Dickinson’s final years, this collection includes facsimiles and transcriptions of letters, full compositions, drafts, and manuscript copies found after her death. Werner identifies one of these documents as a “trace fragment,” and, akin to leitmotifs, these fragments exist both autonomously and as parts of larger compositions. Like many of her published works, the constellation of fragments selected for this piece was not titled by Dickinson;
Blue Bird is titled after the longest fragment’s subject out of 6 total. These fragments lend themselves naturally to a musical style that kaleidoscopically hovers around a sound space, given their contradictory instability and tight interrelation.
Blue Bird not only sets to music Dickinson’s text, but also its textual condition.

To determine what texts will be shown for the performers, the score will use the past 24 hours’ apparent temperature and cloud cover data from the location of the performance obtained via the Dark Sky API. The musical setting communicates the relationship between weather and the chosen fragment of text. While it would be possible to use more data points from the API, Using more data points with relatively limited text would produce different settings of the same text, rathern than the more tightly through-composed aleatoric composition that is
Blue Bird.

The dynamic scores: encoding and presentation

The scores of the experiments described above are encoded with the Music Encoding Initiative XML format, which provides a number of strategies for encoding textual variance and ambiguity. Specifically, the encoding uses elements defined for encoding variants across textual sources and critical apparatus. We define a list of “sources” that correspond to predetermined weather patterns; these correspond to <rdg> elements throughout the text that are grouped within the <app> element when certain musical text changes depending on the weather condition. 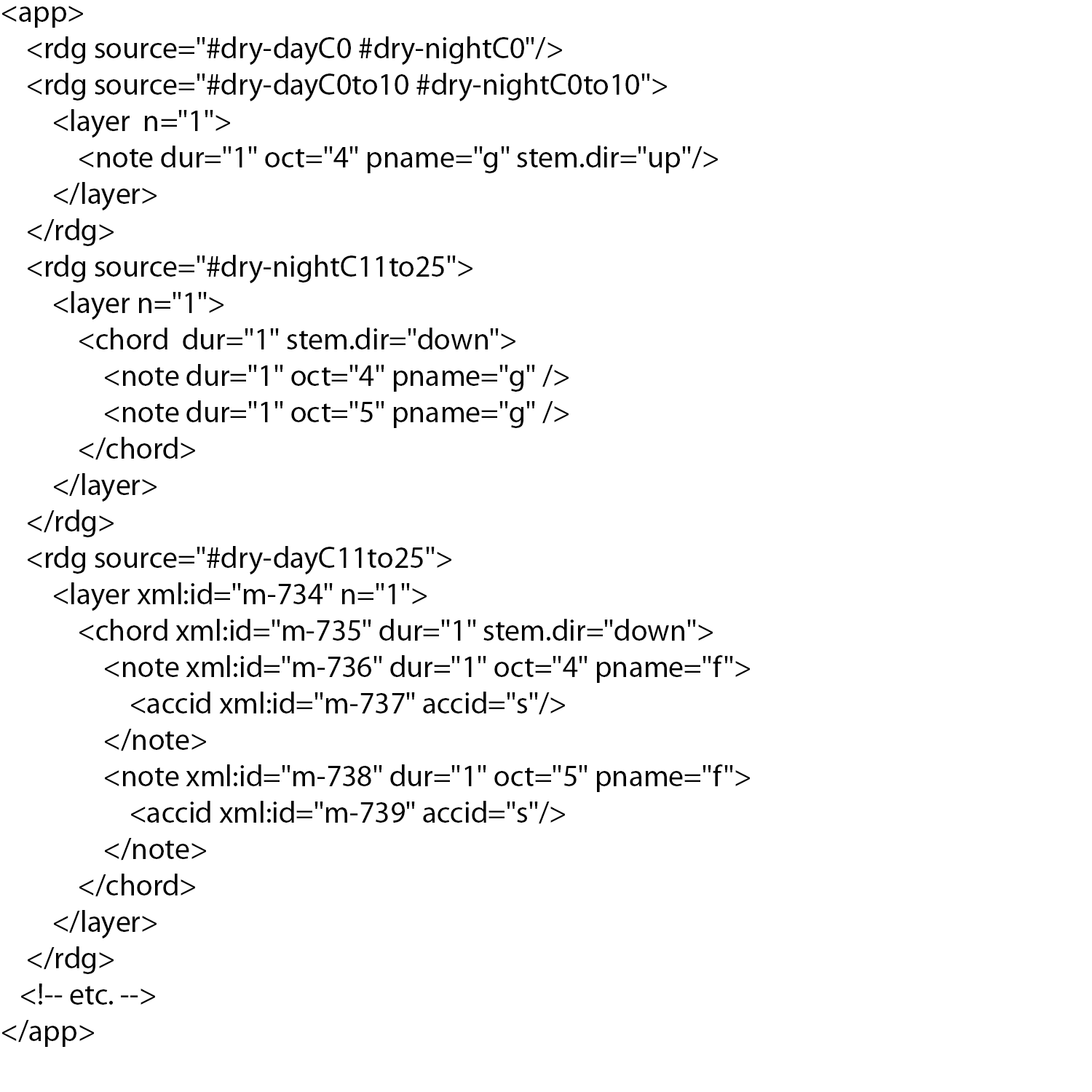 Besides including text in direct alternation, variation is also included by translating musical ideas to different locations in the piece. In order to do this effectively and avoid encoding the same music notation multiple times, these units will be encoded in separate files and included via XInclude operations.

The dynamic scores are published as a dedicated website by using Verovio, an engraving engine for MEI. By producing SVG output that maps directly to the underlying MEI encoding, Verovio makes it possible to locate the pre-composed variants in the text and manipulate the score according to weather data