HuViz: From _Orlando_ to CWRC… And Beyond!

The Orlando Visualizer (OViz) was originally conceived in 2010 as a tool that would display extracts from The Orlando Project’s textbase as a series of interconnected nodes in a graph. Since then, the project has grown to address digital humanities research more generically. Now called HuViz (fig. 1), the Humanities Visualizer is a browser-based, interactive interface that allows for the exploration of semantic relationships and ontologies represented using Linked Open Data (LOD). LOD is a practice of creating, sharing, and interlinking bits of information on the Semantic Web (linkeddata.org). At its core, LOD is a way of structurally representing data as connected. More broadly, it challenges how information networks are built within digital environments and calls attention to the importance of making these networks and the data they house open and accessible. In the spirit of LOD, HuViz came together as a tool designed to make available the contents, along with the contexts, of portions of the Semantic Web to experts and lay-users alike in ways that are open, editable, and transferable. This poster will provide an overview of HuViz’s development, shaped by the results of user-testing, the demands of Orlando’s complex data, as well as the growing ontology of the Canadian Writing Research Collaboratory (CWRC), which is building out from the Orlando data. Future possibilities include use by other projects housed by CWRC’s infrastructure (see beta.cwrc.ca).

The CWRC ontology team has been using HuViz to visualize the Orlando datasets, translating the textbase’s XML-encoded entries on women writers into RDF assertions (also referred to as triples) (Simpson and Brown, 2013). The test extractions made from the Orlando textbase range from Virginia Woolf to Margaret Atwood, encompassing everything from the schools they attended, to the places they lived, the writers they influenced, and the overlapping and often contradictory cultural forms that contribute to an author’s social identity. Given the scope of the Orlando data, which contains millions of connections, as well as the immeasurably bigger Semantic Web itself, the task of visualizing massive hoards of data in meaningful ways remains a central question in developing HuViz. This problem of visualizing large-scale datasets is by no means new for digital humanities scholars (Duke, 2005; Sherratt, 2011). With increased attention paid to the value of LOD for humanities scholarship in the past decade, the question of how to make these graphs both interactive and legible has arisen as a major concern (Katifori, 2007; Ghorbel et al., 2016). Beyond interface design, questions of tool mediation and the “avenues of interpretation” (Warwick, 2012) made available to the user are central to discussions surrounding the false neutrality of technology (McPherson, 2012; Nakamura, 2002; Chun, 2005). With these concerns in mind, the design of HuViz incorporates some aspects of D’Ignazio and Klein’s “feminist data visualization” principles (2016). The ability to visualize data along with the structure of the ontology that governs it, for instance, aims to enable interrogation, such as Jacqueline Wernimont’s, of “how and where we might locate feminist ideology and politics within digital archives” (2013).

In the latest iteration of HuViz, these concerns have materialized in features supporting:

This poster and tool demonstration will show the growth of this tool over the past several years. The poster will provide an overview of feature development and indicate how a growing body of user tests have shaped that process, highlighting a number of enhanced features. These include:

The tool demonstration will introduce attendees to basics of HuViz and invite them to play with it. We will have multiple datasets and ontologies for users to explore, and will provide a link to detailed instructions on how to upload their own datasets or ontologies. 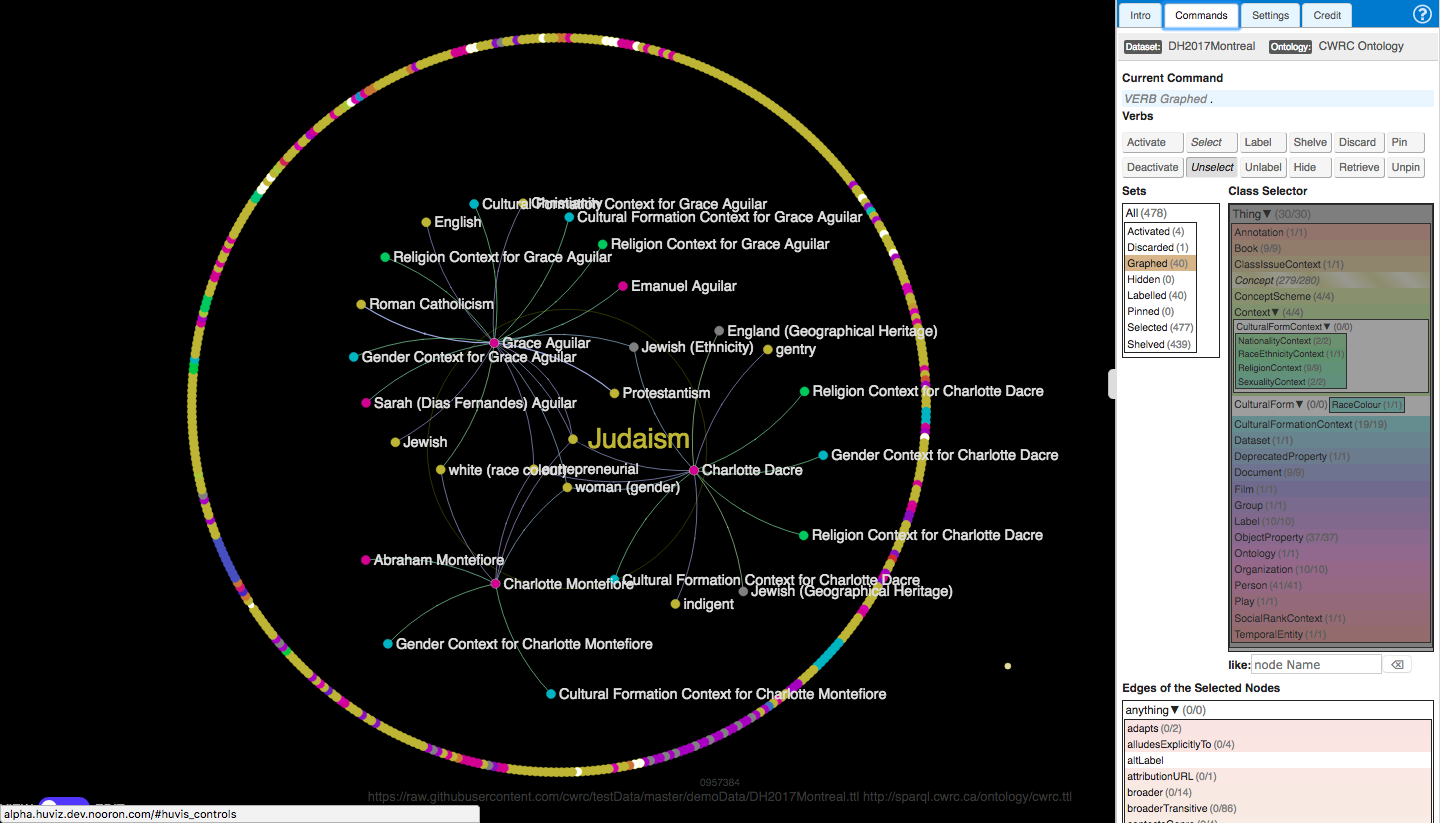