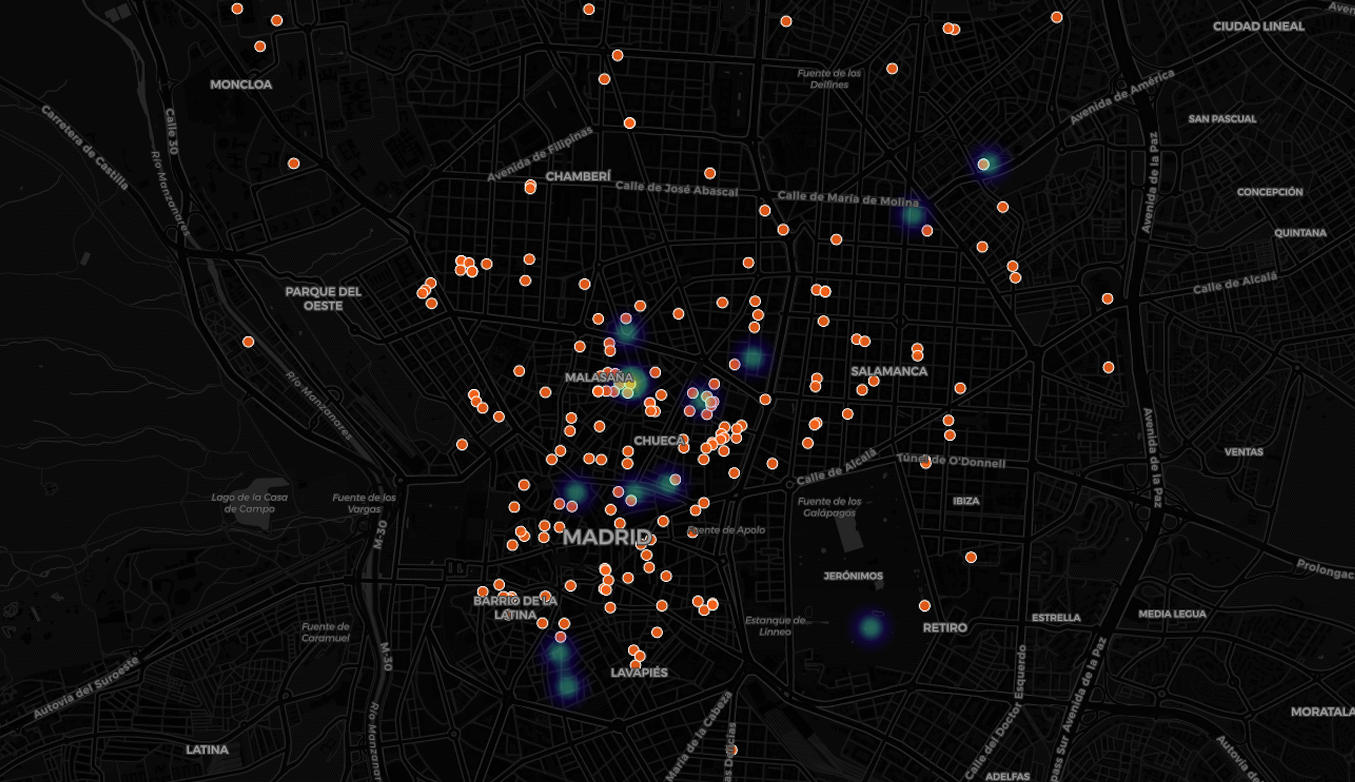 Mapping the Movida is an open web archive and geo-spatial project that visualizes the cultural and creative hubs and networks of the
Movida madrileña, a sociological phenomenon and cultural renaissance that emerged in the first decade of Spanish democracy (roughly 1976-1986), most notably in central Madrid. Among the Movida’s most well-known artists are filmmakers Pedro Almodóvar and Iván Zulueta, photographers Alberto García-Alix and Ouka Leele, illustrators El Hortelano, Nazario, and Ceesepe, poet Eduardo Haro Ibars, novelist Eduardo Mendicutti, fashion designers Jesús del Pozo, Manuel Piña and Agatha Ruiz de la Prada, and musicians Ana Curra and Alaska (Olvido Gara), among many others. One of the most striking characteristics of those who have been historicized as so-called “artists of the Movida” is that they are, with few exceptions (Almodóvar, Ruiz de la Prada, Curra, Alaska), men of upper middle-class upbringing. Additionally, when examining the canonized geographies of the Movida—that is, the cultural hubs and culturally productive spaces of the period—we find that these canonical artists are primarily centered around Madrid’s core neighborhoods, such as Malasaña, and, in few instances, the affluent north-central sector of the Spanish capital. In the canonized Movida, peripheral, and often working-class neighborhoods are largely excluded from the cultural map and countercultural histories of this period.

This project is a scholarly response to the limited scope of artists—mostly male and professionally active in central Madrid—historically associated with the Movida in mainstream press and scholarship. In its mission to bring to light and build “BRIDGES/PUENTES” with uncharted human geographies of the period, Mapping the Movida aims to: (1) re-create the Madrid of the Movida using a range of visual, textual and spatial media, data, and thick (Presner, Shepard, Kawano 2014) and deep mapping technologies that document the Madrid of the past; (2) visualize creative networks and cultural hubs of the Movida through various cultural and critical lenses—including mainstream Spanish media outlets (
El País,
ABC,
El Mundo), scholarly articles, and subcultural publications from the period (
La Luna de Madrid,
El Víbora,
Ozono,
Madrid Me Mata)—to reveal how each lens represents the Movida in different, divergent, and/or similar ways and “provoke negotiation between insiders and outsiders, experts and contributors, over what is represented and how„ (Bodenhamer, Corrigan, Harris 2015: 4); (3) create a public archive and searchable database of Movida events and artists’ documented movements in Madrid during the Movida; and, perhaps most importantly, (4) de-colonize the geographies of the Movida by revealing spaces, artists, and socio-economic groups that problematize the cultural and spatial canon of the period.

This poster, grounded in archival research from Brown University’s Revistas de la Movida Collection, will exhibit the methodology and tools (Carto, Esri Story Maps) that have been used, the archival and theoretical concerns that have arisen, and the revelations that have been made during the various stages of project development. It will also demonstrate how Mapping the Movida’s marriage of archival research and technology questions and queers the scope of what has been historicized and canonized as the “culture of the Movida” over the last nearly 40 years. At stake in this project is our understanding of the cultural and human geographies of Madrid during this period as well as our knowledge of artists and cultural products that have rarely, if at all, been studied and imagined within the corpus of so-called Movida artists and texts.