Theatre studies is a largely under-discussed topic in digital humanities research projects. It’s lagging behind the first wave of digital humanities scholarship, «  focus[ing] on large-scale digitization projects and the establishment of technological infrastructure » (Presner, 2010). Theatre studies remains on the fringe of a growing phenomenon : culture analytics. In the context of big and complex datasets, culture analytics « is the data-driven analysis of culture » (IPAM, 2016). I suggest the expression « theatre analytics » (Bardiot, 2017). To paraphrase the culture analytics definition, theatre analytics is the data-driven analysis of theatre, whether it concerns theatre history (Caplan, 2016), drama or mise-en-scène. To understand what quantitative methodologies can bring to the knowledge of theatre, I propose a case study of Merce Cunningham. What can we learn about Merce Cunningham, one of the most influential
choreographers of the 20th century, thanks to theatre analytics ? A leader of the American avant-garde throughout his seventy year career from 1938 to 2009, he establishes in 2000, in the twilight of his career, the Merce Cunningham Trust, in order to preserve the integrity of his work. At the same time, he decides to dissolve the Merce Cunningham Dance Company (MCDC) two years after his death and a legacy tour. This is an unprecedented initiative. On one hand, it demonstrates exceptional effort and dedication to document the works. On the other hand, it challenges the ephemeral nature of performing arts : 86 out of 183 choreographies are documented with “digital Dance Capsules” “so that it may be performed in perpetuity”(Dance Capsules, n.d.). By the way, two groups of works are defined : the canon (key works with extensive documentation in order to perform them again and again) ; the auxiliary (minor works with no documentation available to the public and
de facto impossible to replay).

The data was collected from the Merce Cunningham Trust website. It concerns theatre production and cast, Dances Capsules documentation and the history of the MCDC. The dataset contains 183 works from 1938 to 2009 (including 86 Dance Capsules) and 347 people. We can identify three main data categories : people, works and documentation. What can we infer from beyond the data about the MCDC history, Cunningham’s aesthetics and documentation strategies ?

Measuring means measuring instruments. I used various and complementary tools in order to vary the approaches and analysis of the same dataset : Gephi for network analysis ; Palladio for geographic and temporal representation ; spreadsheet (Excel, Open Office, Datamatic) for statistics analysis. This paper will present the first results of this research, part of it conducted with students during a graduate « introduction to digital humanities » course. Statistical diagrams show three different periods of Cunningham’s work ; a stylistic signature with a preference for pieces that are 30 minutes long, and for soli, sextets and works with 13 to 15 dancers ; a general trend towards more dancers and more length ; the special place of soli in order to articulate the canon and the auxiliary ; the organization of documents in the Dance Capsules. Network analysis let me define two different ways of collaboration, the « star » and the « spiral », and raises awareness on pivotal dancers. Geographic representation highlights relations between Europe and the United States.

In a wider historical perspective, it would be interesting to compare these preliminary results with other datasets. One example : two patterns have been identified in the Cunningham collaborations network : the star (figure 1), with discontinuous, centralized collaborations and groups separated from each other; the spiral (figure 2), with continuous, collective collaborations and one group growing organically. The change from the star to the spiral takes place when the company is created. Do these patterns characterize other choreographers and directors careers ? Is the creation of the company the main factor causing the evolution from the first pattern towards the second one ? While a well-worn issue – we do know that the creation of a company plays a crucial role in a career – the fact remains that “theatre analytics” let us visualize the patterns this break constitutes (or maybe not) and define different ways of collaborations. 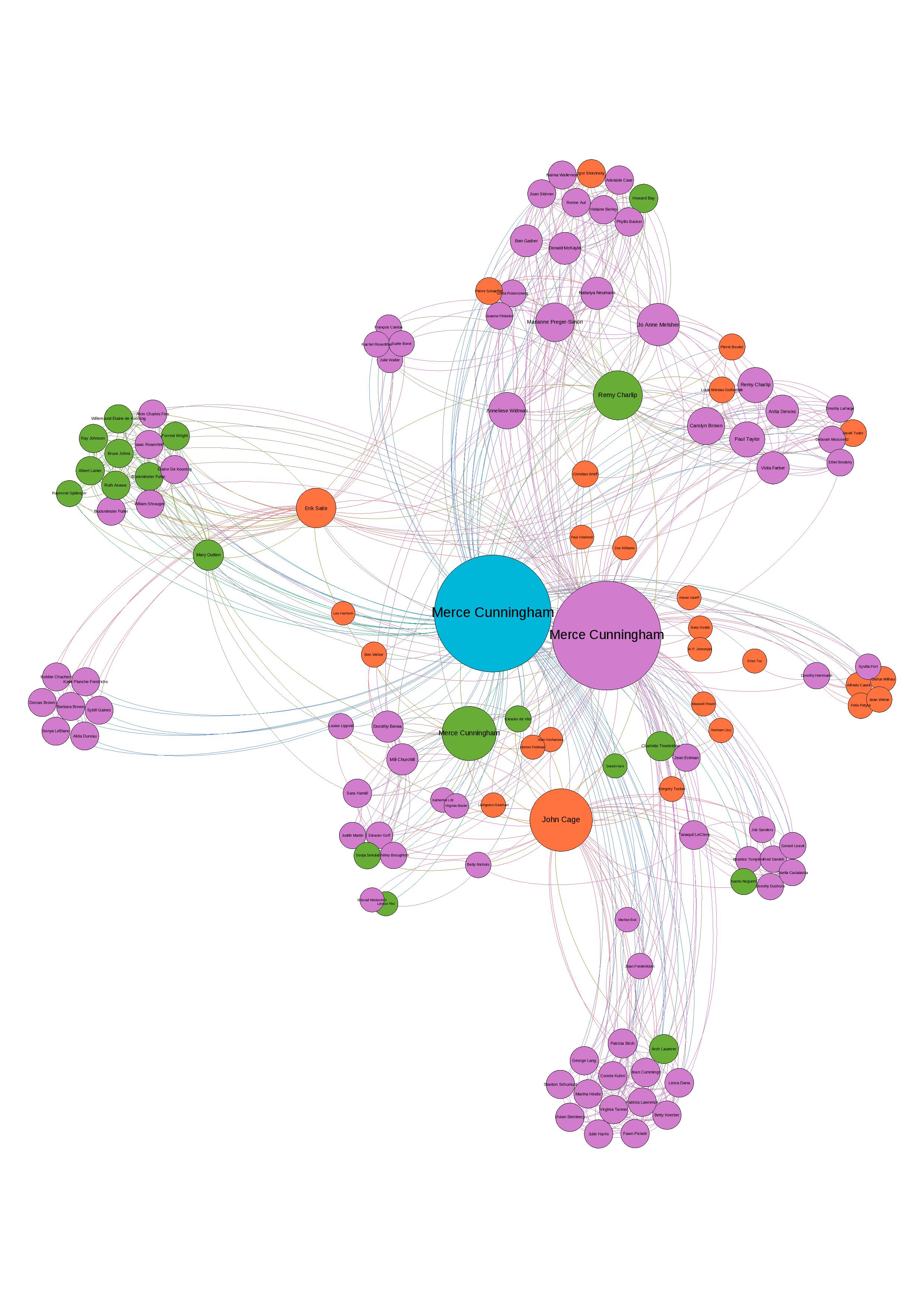 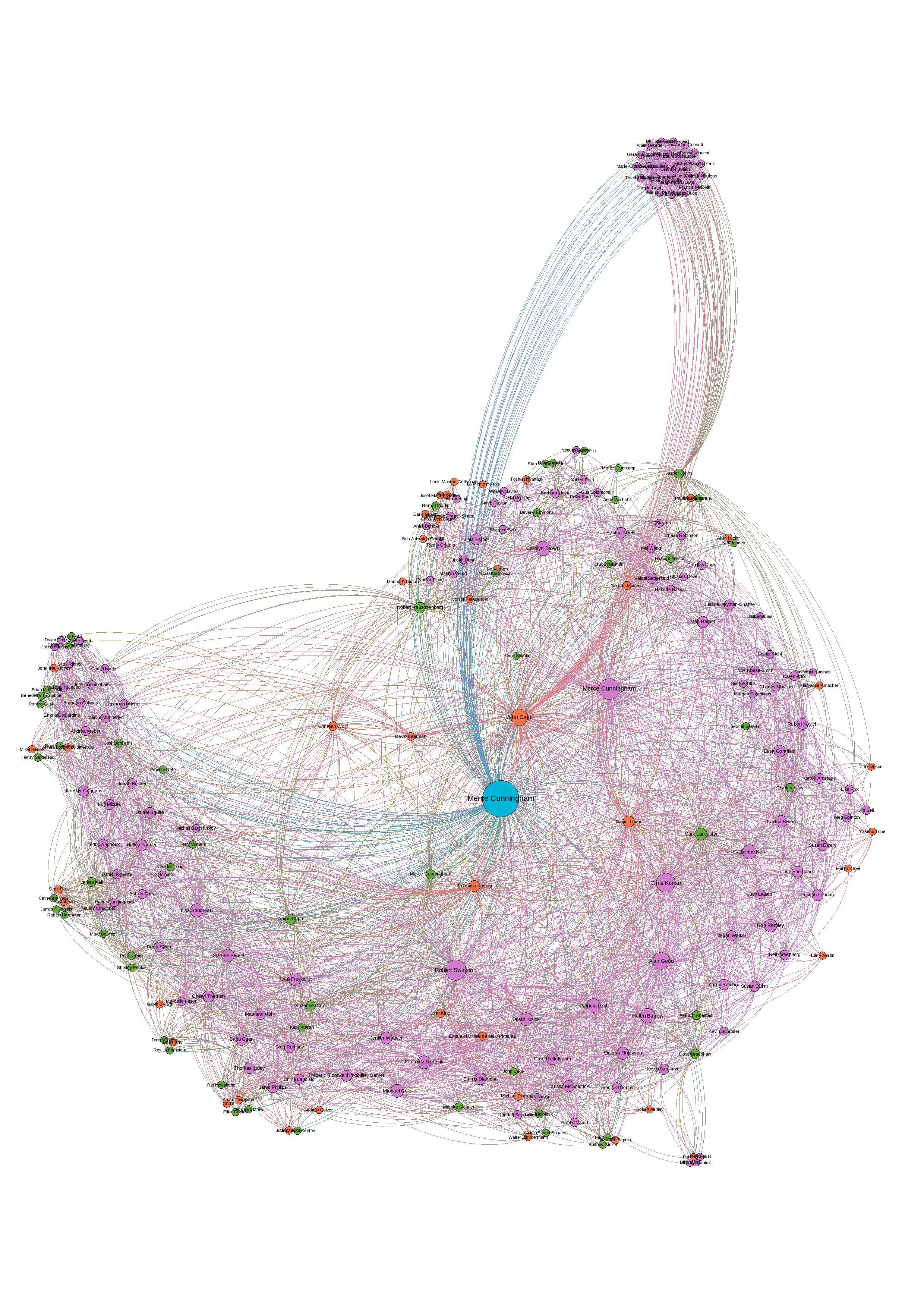