“Just now I am
aching
from the fatigue of
making Charts
for the Schools who will take the book… Every school must have a mural chart—& there is but one way of making them (until they can be made by ten thousands) & that is by stencilling… I can do one a day. But I must sell them cheap… To day I worked
15 hours
—only sitting down to take my meals—& so I have done all week—so much fatigue stupefies one—but as soon as it is adopted in a few towns I shall be able to hire someone to do this drudgery for me.”

In these lines, Peabody provides some of the only extant documentation of her “mural charts”– large-scale versions of the pedagogical charts that she designed to accompany her U.S. history textbook,
A Chronological History of the United States
(1865). Peabody’s textbook promoted data visualization as a pedagogical method. Her visualization scheme involved translating significant historical events into shape and color, and arranging them on a grid (see figures 1). Students could then use the grid as a visual mnemonic, inscribing each century of U.S. history into their memories.

The project team has explored Peabody’s visualization scheme in detail (e.g. Klein et al., 2017). But the “mural charts” that she describes in her 1850 letter have not been preserved. Scholarship describes how Peabody would lay the mural charts out on the classroom floor, inviting students to sit around the charts and discuss the colors and shapes that they perceived (Ronda 1999). We were captivated by how, in this particular use, the mural charts seemed to anticipate a form of embodied, experiential learning. We were also taken with the experiential aspects of making the charts– the “fatigue” and the “drudgery”– that Peabody describes in her letter. We thus embarked upon a project to recreate Peabody’s lost mural charts using physical computing materials, amplifying the embodied and interactive aspects of interpreting the charts that are documented in these archival fragments, and attending to the additional experiential aspects of our own chart-making process. In doing so, we bring together historical fabrication work (e.g. Sayers 2015) with feminist making (e.g. Losh and Wernimont 2014).

The reimagined mural chart consists of three layers: a fabric layer that approximates Peabody’s original canvas (figure 2, left); a grid of 900 individually-addressable LEDs (figure 2, right); and a soft-button touch interface for toggling each LED off and on (figure 3). The result is an illuminated touch interface that conveys the abstraction of the original grid and the embodied nature of the learning experience, enhanced by contemporary technologies.

Strips of conductive copper tape, arranged in a 30 x 30 matrix and positioned on soft neoprene, are used to register the location of each button press. Two Arudino Megas, daisy-chained together, determine the column and row of the touch. A third Mega, also daisy-chained, takes the location of the button press and illuminates the corresponding LED. 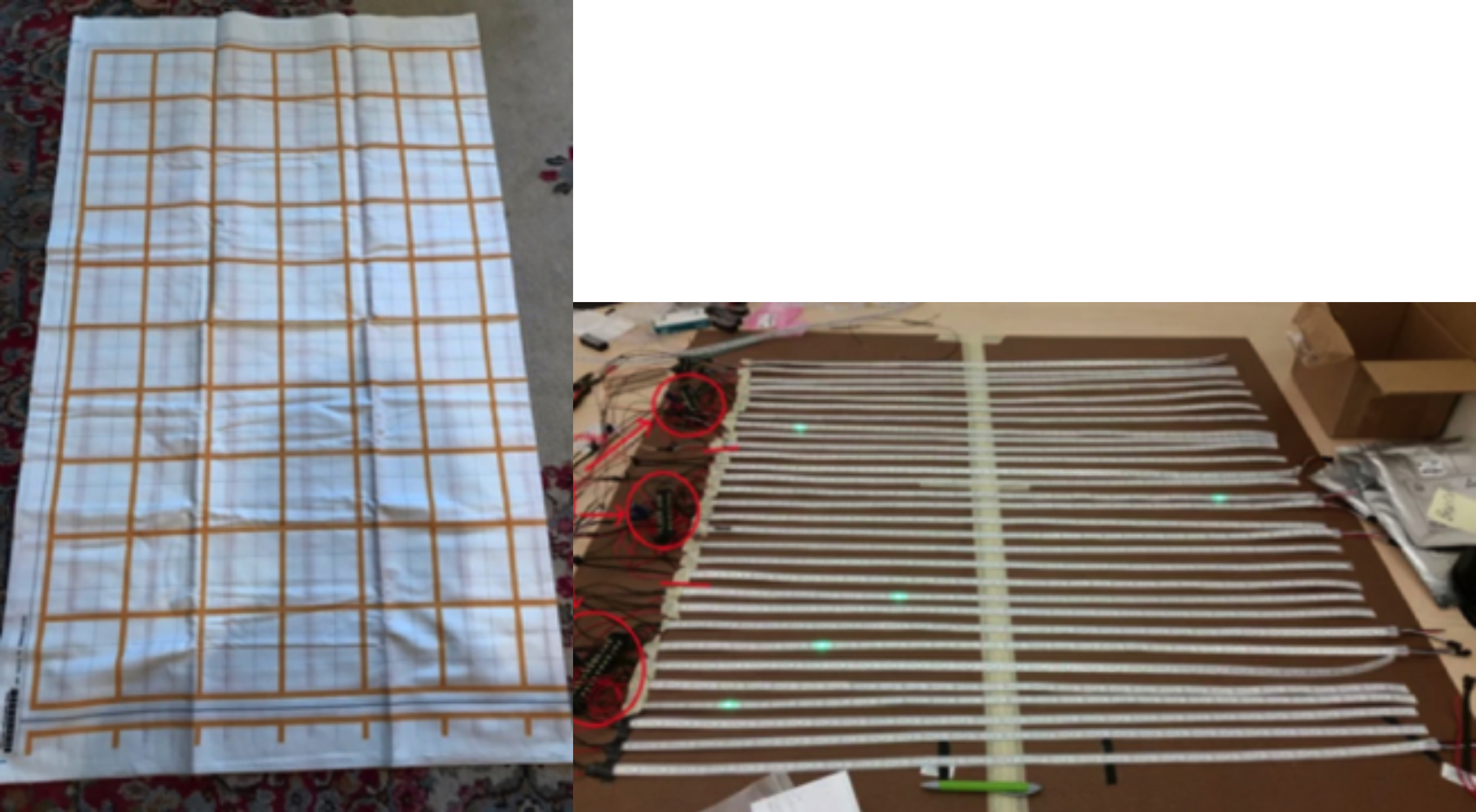 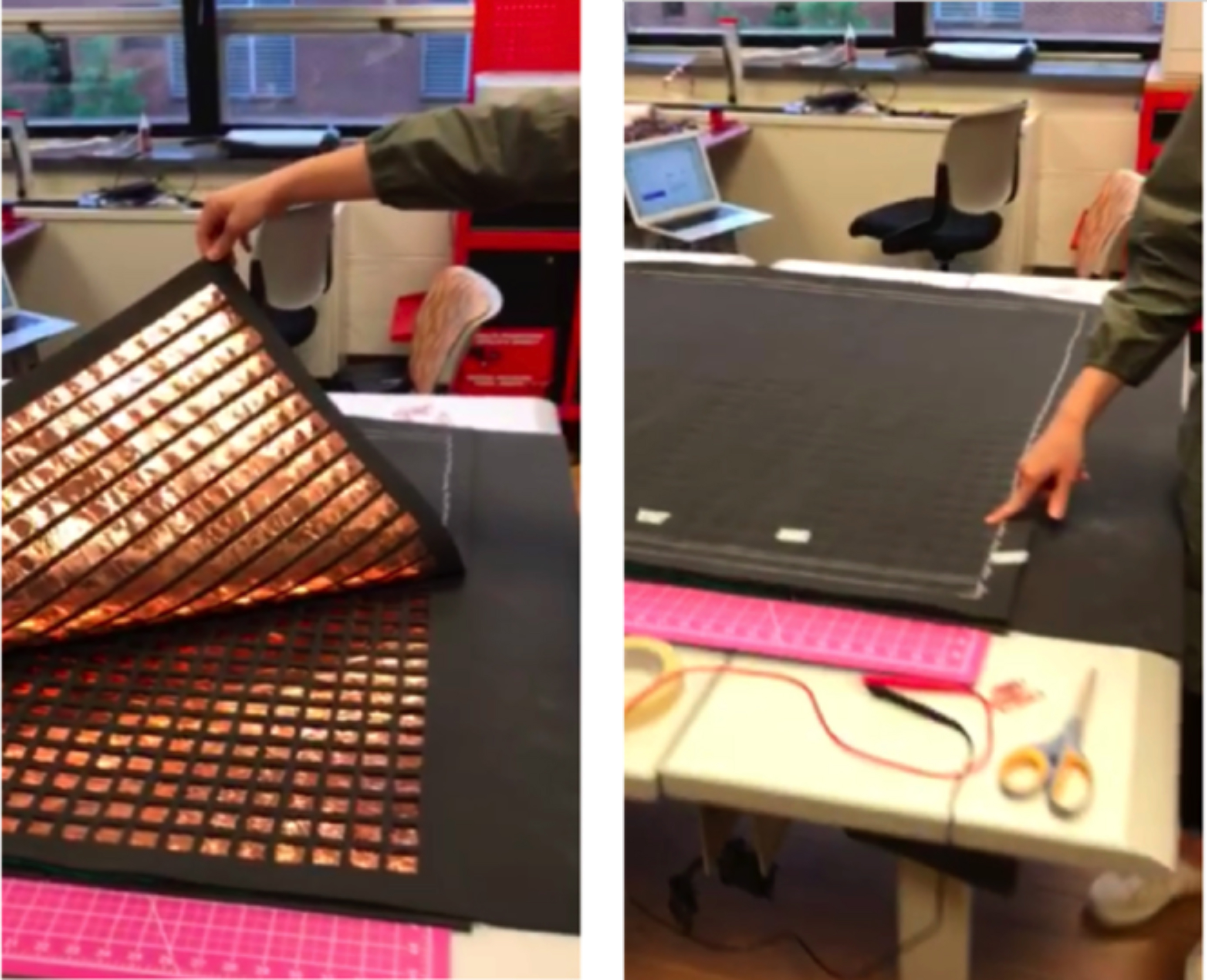 Currently, the chart allows the user to touch any square to turn on the corresponding LED. The next steps are to design and implement the interaction that will allow the user to create and input their own events; and to design and implement a color picker, perhaps employing a digital interface. The goal for this phase of the project is to complete a start-to-finish interaction from selecting a historical event, choosing its color and position, and then visualizing it on the mural chart.