Bridging Divides for Conservation in the Amazon: Digital Technologies & The Calha Norte Portal

Calha Norte is the northernmost region of the Brazilian Amazon, and constitutes the largest mosaic of protected areas in the world, encompassing nearly 14 million hectares of land. It stretches from the Amazon river in the south to the frontier regions between Brazil and the Guianese and Surinamese borders in the north, encompassing half of Pará and the state of Amapá in its entirety. Due to the vastness of the area, enforcement of protected areas can be poor, and far too little is done to involve local communities in the decision-making processes that inform conservation policy. Increasingly, digital technologies are helping to overcome some of the challenges to conservation.

In the past ten years the Amazonian Institute for Man and the Environment (Imazon), an environmental NGO based in Belém, has made a name for itself by developing a “logging feasibility map” (Souza et al., 2010). The feasibility project uses GIS mapping software to chart data on transportation networks (including existing roads and navigable rivers), topography, biodiversity figures, deforestation areas, conservation zones and timber processing facilities. The combination of this data allows for reliable predictions of at-risk areas for deforestation, which has led to better zoning of different areas for community use, conservation and even tourism. By charting the data in a format easily interpreted by stakeholders, the feasibility maps produced by Imazon have become invaluable tools for raising public awareness and building consensus between enforcement officials, regulatory agencies, loggers, conservation groups, and local communities.

Given the immensity of the Calha Norte region and the isolation of many of its inhabitants, communication and monitoring are pressing challenges for authorities charged with the enforcement and protection of conservation zones. Initiatives like Imazon’s feasibility map offer innovative solutions at a relatively low cost. Digital tools such as GIS mapping, data analytics software and tele-communications technologies are helping to bridge gaps in the knowledge and understanding of the ecological, political, and social realities of the region, thereby improving predictors of at-risk zones and response times to threats. This short paper presentation will discuss some of the ways in which digital technologies are helping environmentalists overcome the challenges of conservation policy in the Amazon region of Brazil, especially in Calha Norte. During the presentation, I will present my own personal project, the Calha Norte Portal, a website which features an interactive data visualization map of the protected areas in Calha Norte mosaic as well as a blog on conservation issues and the history of the region. In doing so, I hope to demonstrate the potential of the tool to contribute to ongoing research on conservation policy in the Amazon. 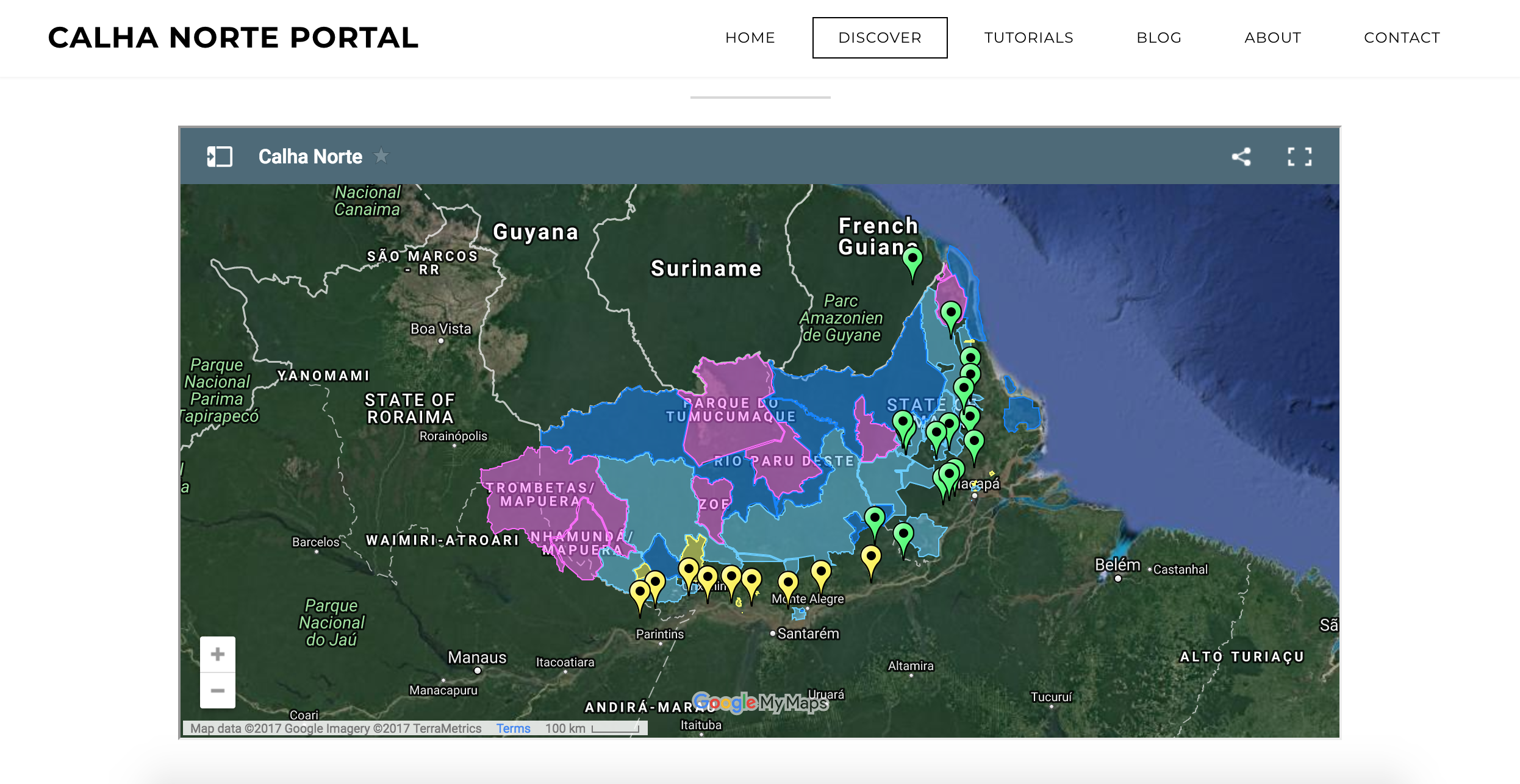 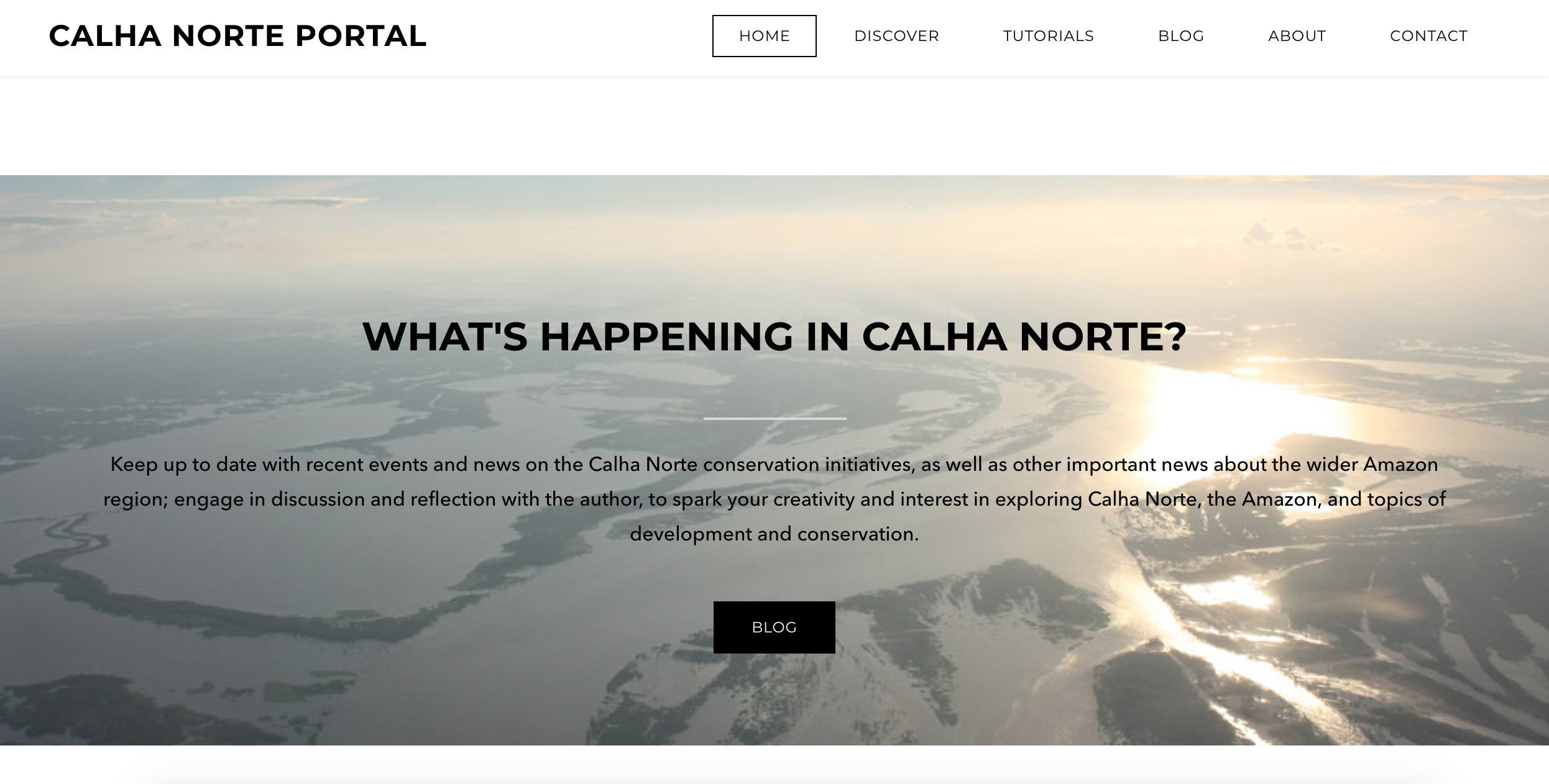 The data used for Calha Norte Portal was gathered during my work with the Social Policy department at Imazon. In accordance with the department’s focus on communities in the Calha Norte region, I compiled data from various sources about the region’s history, cultural diversity, transportation networks, governing bodies, development indices, demographics, economic activities, protected area implementation, and accessibility. This data was then plotted in the creation of the Calha Norte Portal. 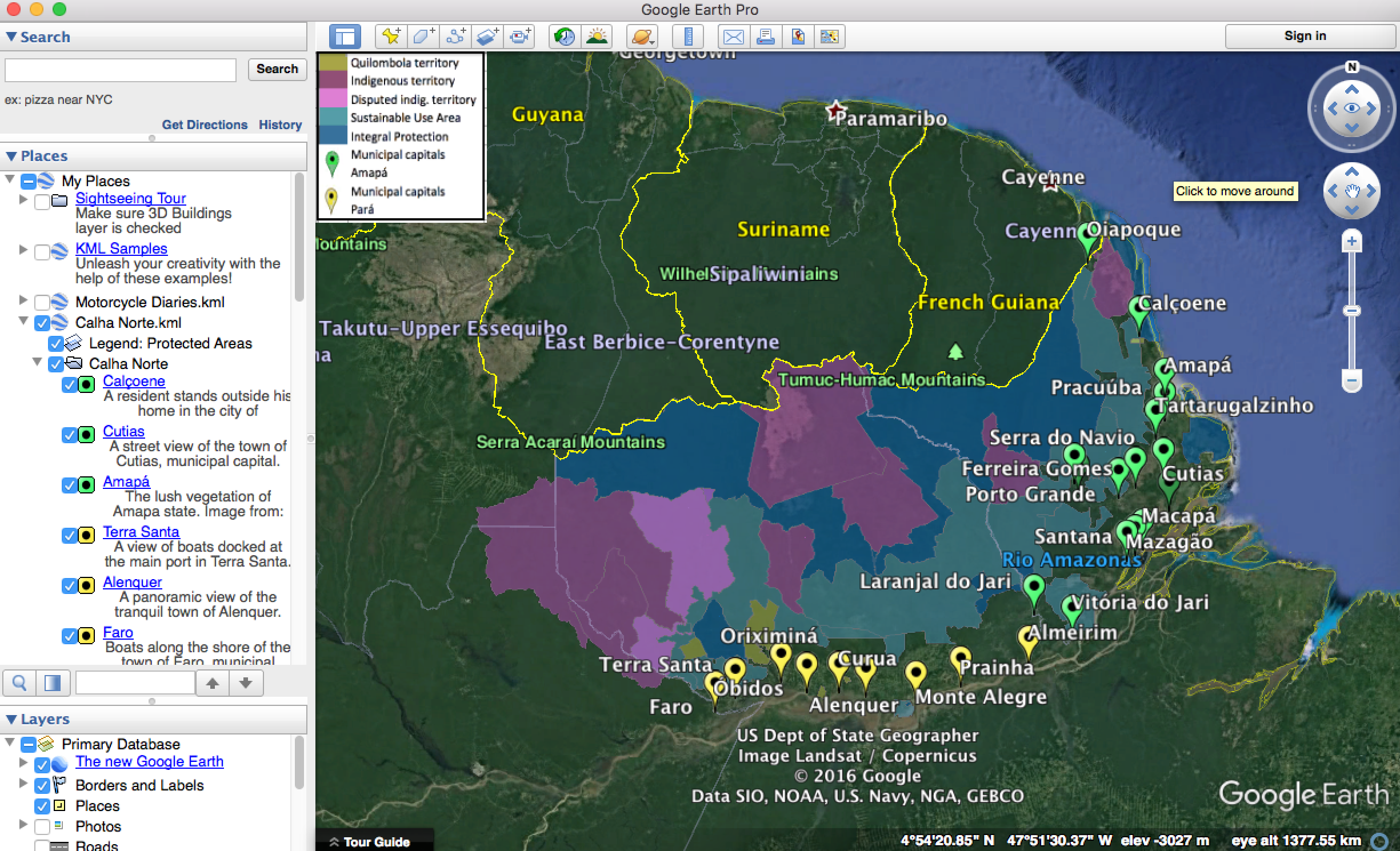 Ex. 3: Calha Norte in the Google Earth map. This application allows the user to navigate through the region by clicking on protected areas, indigenous territories, maroon communities and municipal capitals to access historical information, demographic statistics, economic and political data, photos, deforestation figures and an implementation index for protected areas. Users can also look back in time at satellite images from 1960 to the present and visualize patterns of deforestation, and urban sprawl over time. 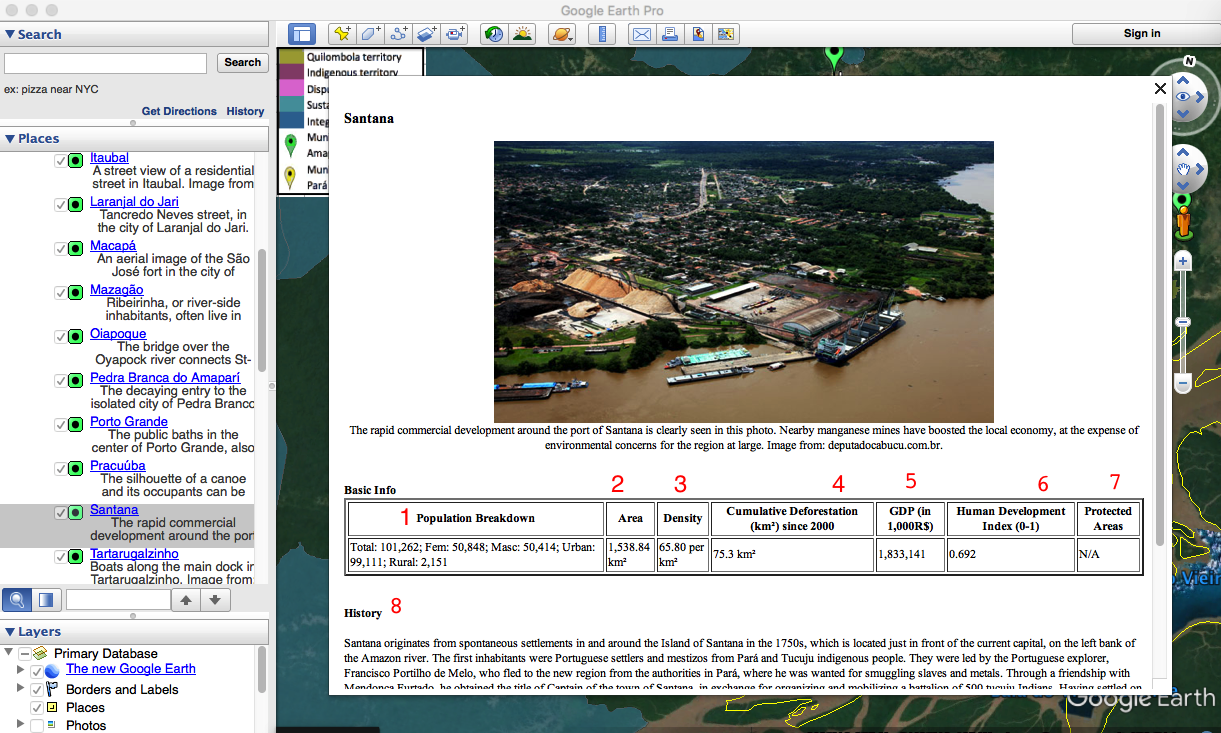 Ex. 4: Example of the pop-up window for the municipality of Santana, Amapá.

The Calha Norte map focuses mostly on political, economic, historical, cultural and social data for populations in protected areas and municipalities. As an anthropologist, I am particularly interested in dispelling the myth of Amazonia as an uninhabited biological entity. Advocating for conservation policy which involves the participation of local communities has been the focal point of recent critical reports from the International Union for the Conservation of Nature (IUCN) (Cisneros and Orellana, 2017; Orellana, 2017). These reports reflect a general shift in attitudes on the management of protected areas away from traditional approaches which sought to isolate designated conservation zones and often neglected the history of interactions between local populations and the land in question.

My motivation in developing the Calha Norte map was to bridge some of the divides between disciplines in conservation studies. Inspired by Susanna Hecht’s political ecology approach to the study of the Amazon (Hecht and Cockburn, 2010; Hecht, 2013), I wanted to create an interdisciplinary platform which would incorporate elements from the fields of anthropology, political science, history, sociology and geography. By breaking down the data I collected on the Calha Norte region in a visual, interactive format I hoped to facilitate an engagement with the region’s political, social and cultural characteristics, and emphasize the importance of tailoring environmental policy to the realities of the region’s inhabitants. The stand-alone map in Google Earth is meant to be played with, manipulated and explored, in ways that dismantle the linear narrative format of most textual information on the area and incorporate elements of critical cartography studies. Crampton and Krygier state that critical cartography demonstrates its political nature by “linking geographic knowledge with power” (2005: 1), suggesting that a democratization of mapping tools through digital technologies can also result in new avenues for democratizing political power. My project on the Calha Norte region aims to engage with this idea by reformulating knowledge of the region with a focus on mapping its social, cultural and historical characteristics. By advancing a more holistic vision of human interactions with the environment, I hope to make an argument for conservation policy which advocates for greater local-level management of natural resources by the inhabitants of designated protected areas.

Beyond this engagement with the critical cartography literature, my short paper presentation will also raise questions on open source access to information and digital technologies related to environmental issues in the Amazon. Particularly, my paper focuses its commentary on the complexities of conservation in the region, and the importance of greater transparency in the creation and management of protected areas, indigenous territories and traditional community lands. In relation to the over-arching theme of the conference, I hope that my presentation will demonstrate the immense potential for digital technologies to bridge divides of communication and understanding between institutional bodies, environmentalists, policymakers and the communities they serve, as well as bridging gaps in knowledge for scholars and researchers of the Amazon region.