Fireweed, Fuse, and
Border/Lines emerged between 1976 and 1986 in Toronto, Canada, from a hotbed of lesbian and gay liberation, feminist and cultural race politics, thereby circulating in relation to transnational social, political and cultural movements (Butling and Rudy, Gonosko and Marcellus, Monk, Robertson). Whereas digital art historical scholarship often applies computational methods to the analysis of visual images (Zorich, Manovich), this paper instead applies complex network analysis to bibliographic metadata describing artist-led magazine publishing. We propose that there is a correlation between the magazine as a site of imagined community (as a discursive site where artistic scenes and poetic community are formed) (Allen, 12-17); and the complex networks visualized from metadata describing production teams and content of each printed issue (Knight, Long, Lincoln, Liu).

At this time, we have completed the data gathering stage. Prior to our initiative,
Fireweed and
Fuse were not digitized, nor were they comprehensively indexed on digital platforms. A complete data set was created using human cataloguers and a pre-existing metadata schema developed for the e-artexte open repository of publications on contemporary art.
Border/Lines was previously digitized, and housed in an open journal repository. However, this online collection is not complete, further, it was not possible to extract the metadata from this platform in a consistent format
. Contributor names and roles were indexed for each magazine issue (editor, author, translator, etc.). Many of the contributor names and roles already exist within the e-artexte authority files, and standard indexing protocols were expanded to include roles that are not usually recorded in the metadata (members of editorial committees, designers, typesetters, etc.).

To borrow an expression from Hoyt Long’s mapping of literary community, resulting graphs encourage a “sliding back and forth” between the macroscale of the generated graphs and the microscale of the discourse of the artistic and poetic communities represented (316).

A Multi Modal graph (Figure 1) maps relationships between individual magazine issues, contributors (writers, editors, and designers, etc.), artists as subjects of articles, and publishers. Edges were assigned a colour according to magazine title. Node size has been mapped to betweenness centrality, with a filter applied to a range higher than .01.

Lisa Steele and Clive Robertson feature prominently as contributors to
Fuse magazine, with a high degree of betweenness centrality. This is not a surprise, as both authored multiple articles in the magazine, are founding editors and key figures in the Toronto artistic and activist scenes bridged through the magazine’s content (Robertson, Monk). More remarkable is the prominence of Lynne Fernie in the network, best known for later success as the director of documentary films addressing LGBTQ histories. Fernie’s high degree of betweenness centrality and position as a connector between the cluster of nodes surrounding
Fuse magazine and
Fireweed, provides a bridge between these two magazines as spaces that shared an impulse towards lesbian and feminist liberation. Poet and activist Dionne Brand, who works at the intersection of race and gender, also bridges
Fuse and
Fireweed. Cultural policy analyst Jody Berland, and gay activist and environmentalist Alexander Wilson bridge
Fuse and
Border/Lines. Feminist cultural historian Rosemary Donegan bridges all three discursive spaces
.

A second graph, a Single Mode Contributor Projection will map relationships between individual contributors through their frequency of co-occurence in magazine issues. The graph will be filtered through edge weight, which represents co-occurrence in a minimal number of journal issues. We will colour the graph through community detection on this network of contributor relations using the modularity functionality in Gephi (
Blondel et al.).

We anticipate that contributors with a high betweenness centrality will emerge as catalysts for artistic community as it is represented by the discursive spaces of these magazines. Although some of these names may be iconic, “famous” artists and writers, other careers may not have had the same trajectory of visibility. Additional graphs will be generated by publication year to illustrate how the network structure and centrality measures changed over time. 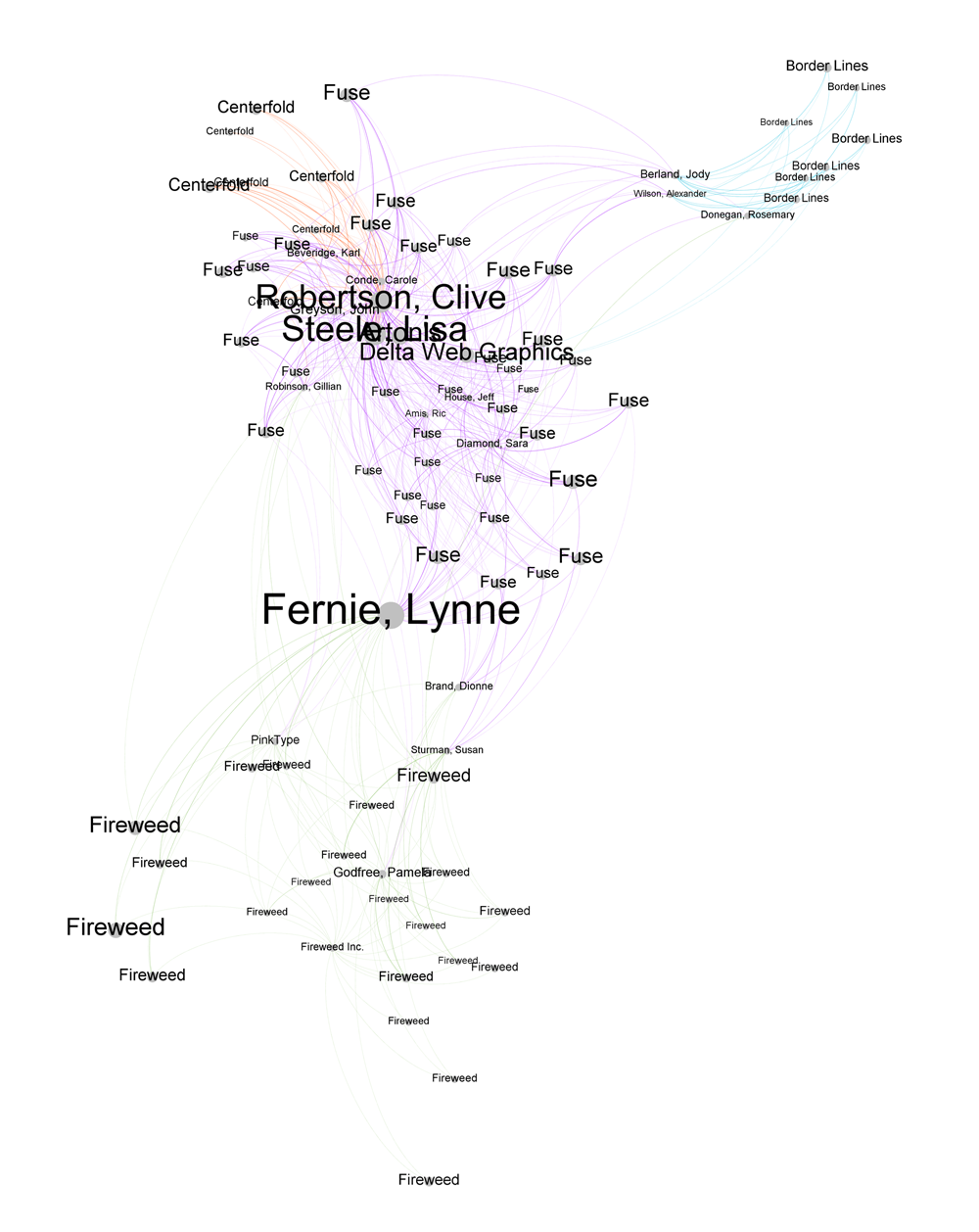