Distinctions between Conceptual Domains in the Bilingual Poetry of Pablo Picasso

Picasso started writing poetry in April, 1935 during a period of personal crisis. Many have cited, among other possible causes the political turmoil in Europe in the period between the two wars. These views are predicated on an assumed irreducible conflict between visual composition and verbal expression. However, even before this he had been fascinated by linguistic structure and alternative methods of expression during his cubist period.

His poetry is not only fascinating as a form of communication from someone who is primarily known for his plastic output, it is also puzzling for anyone researching the interconnection between language and writing, i.e. verbal and graphic signs. His poetry is an attempt to expand the expressive power of language, as he adjoins words in unordered strings, following a technique very similar to cubist collage. Figures 1 and 2 show examples of this technique. The relation between words remains open and bidirectional, so that the reader is free to establish multiple semantic relations. And yet, while we see a close correlation between his poems and his artworks (Elizabeth, 2002) (Picasso and Baldassari, 2005), one cannot deny that his texts are primarily verbal; and this is precisely what makes them fascinating, as they provide a window into Picasso’s mind that is separate from his own artistic creations –although they share with his artworks a predominance of ambiguity (Rubin et al., 1992) and the presence of unresolved conceptual oppositions. 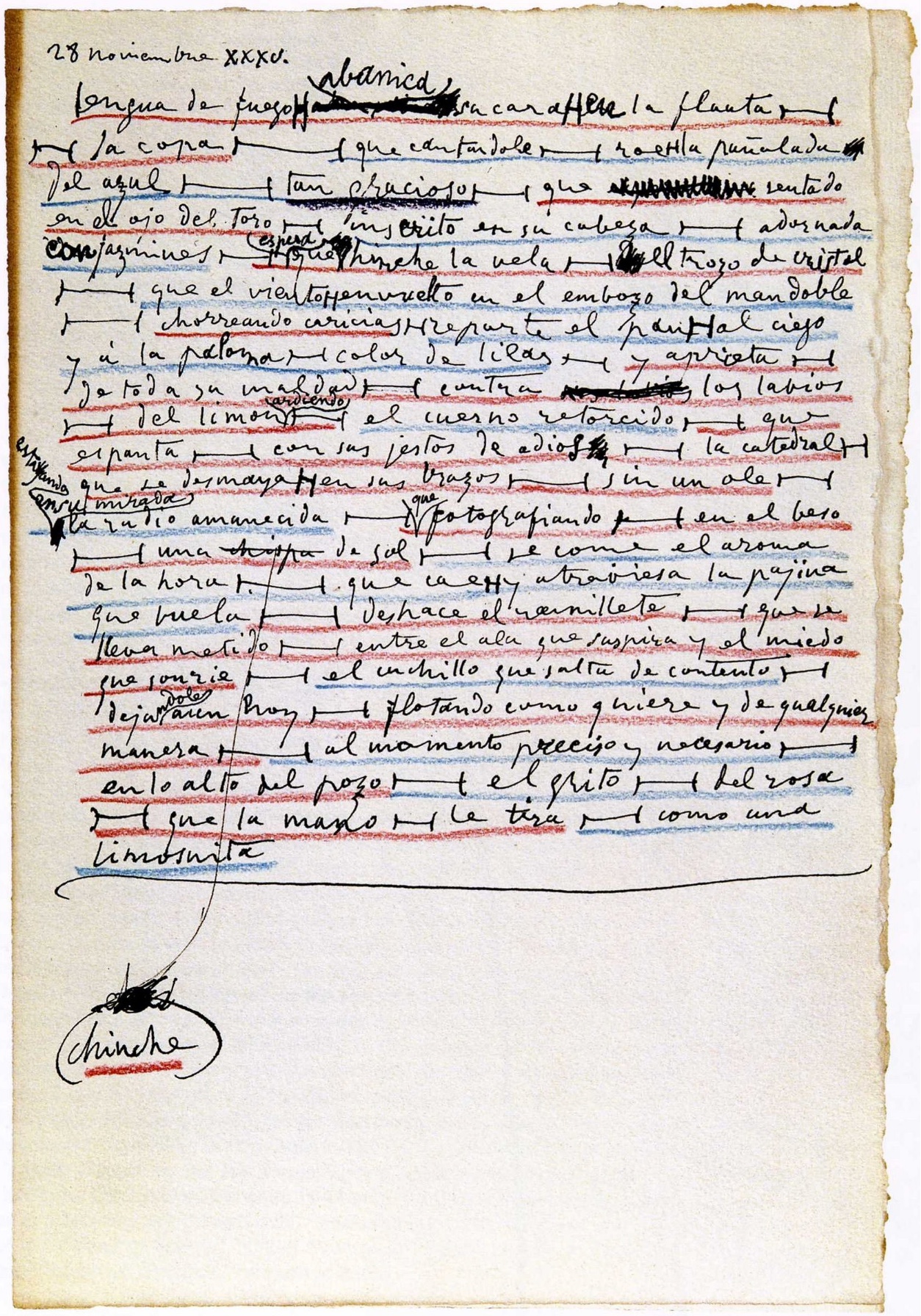 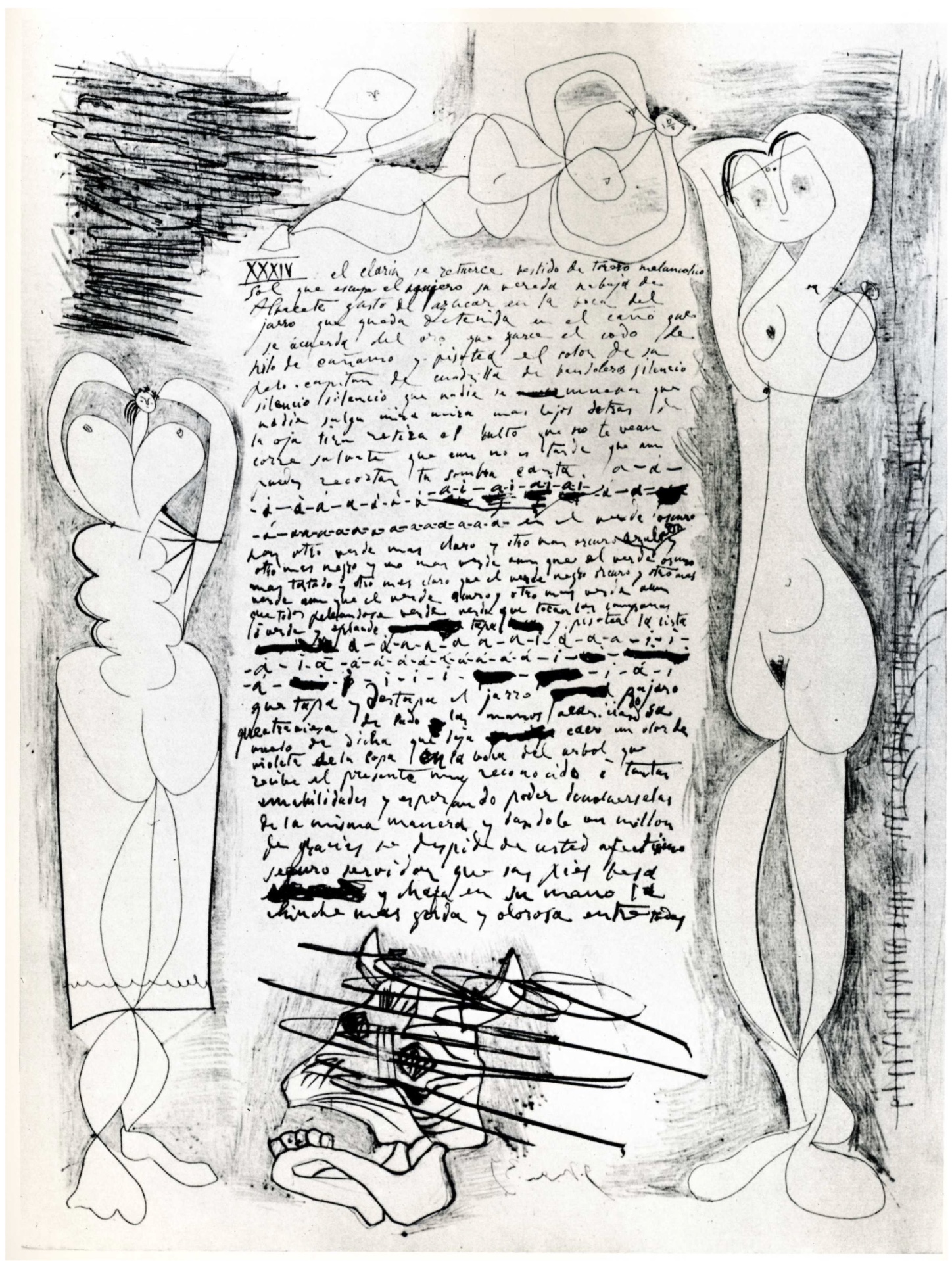 For some time now, our research has taken us through different approaches to analyze Picasso’s artistic legacy (Meneses et al., 2008a), his poetry (Meneses et al., 2008b) and its semantic domains (Meneses and Mallen, 2017). In this paper, we propose to investigate how Picasso explored subtle differences between words within specific concepts in French and Spanish –as he composed his poems in two languages. This new perspective allows us to identify how the two languages offered Picasso a wide range of semantic domains to choose from when establishing subtle contrasts.

We have determined that, in Picasso’s poems, certain semantic domains are predominant in each of the two languages. For instance, Picasso is more inclined to refer to food items and everyday objects in his Spanish poems. On the other hand, given the influence French Surrealist writers exerted on him, his French poems concentrate on more abstract concepts involving politics, religion and sexuality. Why did he choose to use these languages in the way he did? Daix (Daix and Emmet, 1993) has pointed out that “Picasso did not believe in spontaneous poetry – or painting”. Our research will address the question of why did Picasso choose to write in a given language about a specific semantic domain.

We have already classified the semantic interconnections between the concepts that Picasso explored (Meneses and Mallen, 2017). For this purpose, we used a taxonomy-based approach to identify the semantic domains in Picasso’s poetry. We created a set of database tables that allowed us to specify concepts and then map them to their related terms in Picasso’s poetry. It is important to note that these concepts are not bound to a given language per se: we were able to overcome the language barrier by linking concepts using the English translation of relevant terms –a language that Picasso didn’t use in his poems.

We observed that some of the existing semantic categories are linked to a higher number of concepts than others. For example, we find a high number of nominal artifacts in his poems. Some are related to art, such as engraving, impression, ornament, paint and palette; others related to war, such as armor, axe, blade, bomb, bow, bullet, camouflage and rapier. These may appear antagonistic, but in Picasso’s world there is a close relation between destruction in war and creation in art. Not surprisingly for a painter and writer, nominal communication is another frequent semantic category, with such concepts as advice, agreement, alphabet, fable, language, news, outcry and parable.

Given that we had a refined taxonomy, we decided to approach this problem from a purely computational perspective and expand on our previous efforts based on statistical models and algorithms (Meneses et al., 2016). More specifically, we propose to address our research questions by analyzing Picasso’s semantic domains using Latent Dirchlet Allocation (Blei et al., 2003) and Term frequency-Inverse document frequency. We will do this by linking sets of words with their corresponding semantic concepts. Our analysis has shown that these techniques are capable of highlighting patterns and trends in Picasso’s poetry that escape other forms of traditional analysis.

Our study is an attempt to further understand the semantic domains that Picasso operated with. Again, we know that Picasso’s style, both in his visual and his verbal compositions, was very much inspired by collage. What makes them interesting is that those elements he placed together belonged to a restricted set, so that their interconnection, while not obvious to the viewer/reader, must have been somewhat determined in Picasso’s «view» of reality. It is that determined interconnection which Picasso saw that we propose to explore with this study. In other words, we want to get closer to Picasso’s «vision» of the world through his poems in order to investigate how that “vision” may differ from what he depicted in his graphic works.

To summarize, in this paper we propose to analyze why Picasso chose to write in a given language about concepts in a specific semantic domain. More so, through the use of statistical models we propose to identify and pinpoint representative themes and correlations across different concepts and languages. Picasso once said: “Computers Are Useless. They Can Only Give You Answers”. In this case, through our use of computational methods we are attempting to do just that: help us as researchers to get a better understanding of Picasso’s poetry and artworks –and consequently, from the artist that created them as well.