In the last decade, crowdsourcing has become a major technique for transcribing a large volume of historical manuscripts. The volunteers of Transcribe Bentham 1 have transcribed more than 19,000 pages of manuscripts written by Jeremy Bentham (Causer and Wallace 2012). More than 480,000 pages of weather observations from the US Government Arctic logbooks written in the 19th century were transcribed by 4,730 people through the Old Weather 2 project (Eveleigh et al. 2013).

However, managing a crowdsourcing project remains a big challenge for humanities scholars. The following practical difficulties are encountered:

In case of Japanese Studies, the last difficulty is particularly crucial; due to the drastic change in the writing system that occurred at the end of 19th century, 99% of modern Japanese people are unable to read kuzushiji, classical calligraphic renderings of Japanese characters that were common for both publishing and handwriting. Therefore, the crowdsourcing technique has never been successfully applied to pre-modern Japanese materials.

However, humanities scholars can use education to draw the attention of a large number of people, promote their long-term participation, and train them to tackle difficult tasks. The fundamental idea in this paper is to develop a crowdsourcing system embedded in a collaborative learning environment that enables learners to conduct crowdsourced tasks as a part of their learning with their peers.

Minna de Honkoku 3 ( https://honkoku.org/) is a crowdsourced transcription project of pre-modern Japanese earthquake records, developed by the members of the Historical Earthquake Study Group (HESG) at Kyoto University based on this idea. In this paper, we will briefly describe the aim, materials, approach, and results of Minna de Honkoku.

2. The Background and aim of the project

HESG is a joint group of seismologists and historians including the authors at Kyoto University who have been studying pre-modern earthquake records for seismic research and disaster prevention. Since instrumental observation of earthquakes in Japan began only after the end of 19th century, transcribing written records are required for studying past earthquakes. Therefore, Japanese seismologists have developed an extensive collaboration with historians and archivists.

However, the number of records to be transcribed is vast and cannot be handled by a small group of scholars. This prompted the members of HESG to think of using crowdsourcing for transcribing historical earthquake records.

We have set the first goal of our project, Minna de Honkoku, to transcribe all the 114 books from the Ishimoto Collection, which is composed of historical earthquake records collected by a seismologist Mishio Ishimoto (1893-1940) and digitized by Earthquake Research Institute (ERI), Tokyo University. The number of pages in the books ranges from 14 to 268. The total number of pages across the 114 books is 6,386. Each digital image in the collection contains two pages, as presented in Figure. 1. 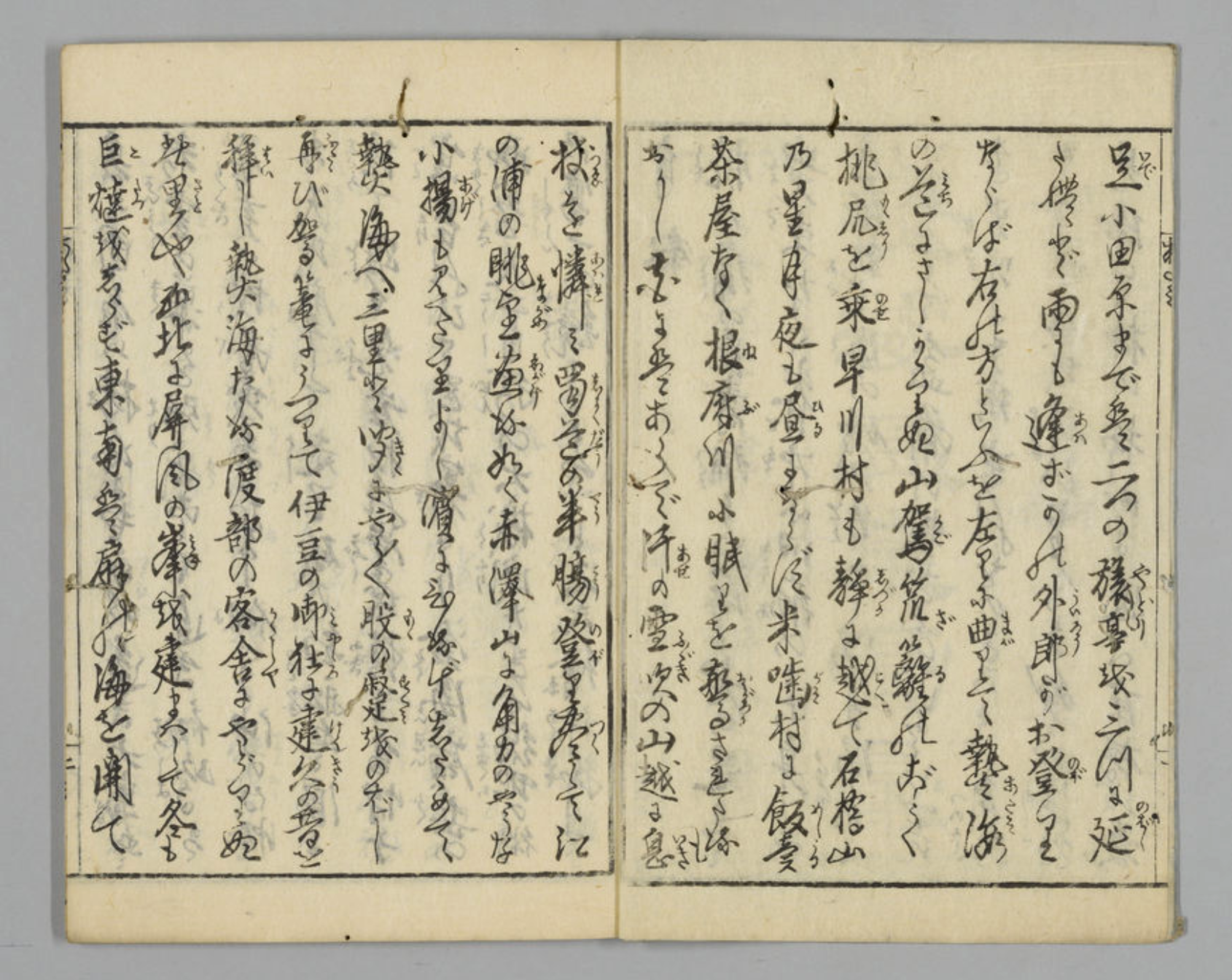 Figure 1. An example of two digitized pages in a book from the Ishimoto Collection

The challenge and our approach

The biggest challenge of our project is to crowdsource the reading of kuzushiji, which is illegible for most modern Japanese people except trained experts. Our approach to this challenge is to design our crowdsourcing system as an online learning environment where participants can learn kuzushiji by transcribing the earthquake records in a collaborative manner. 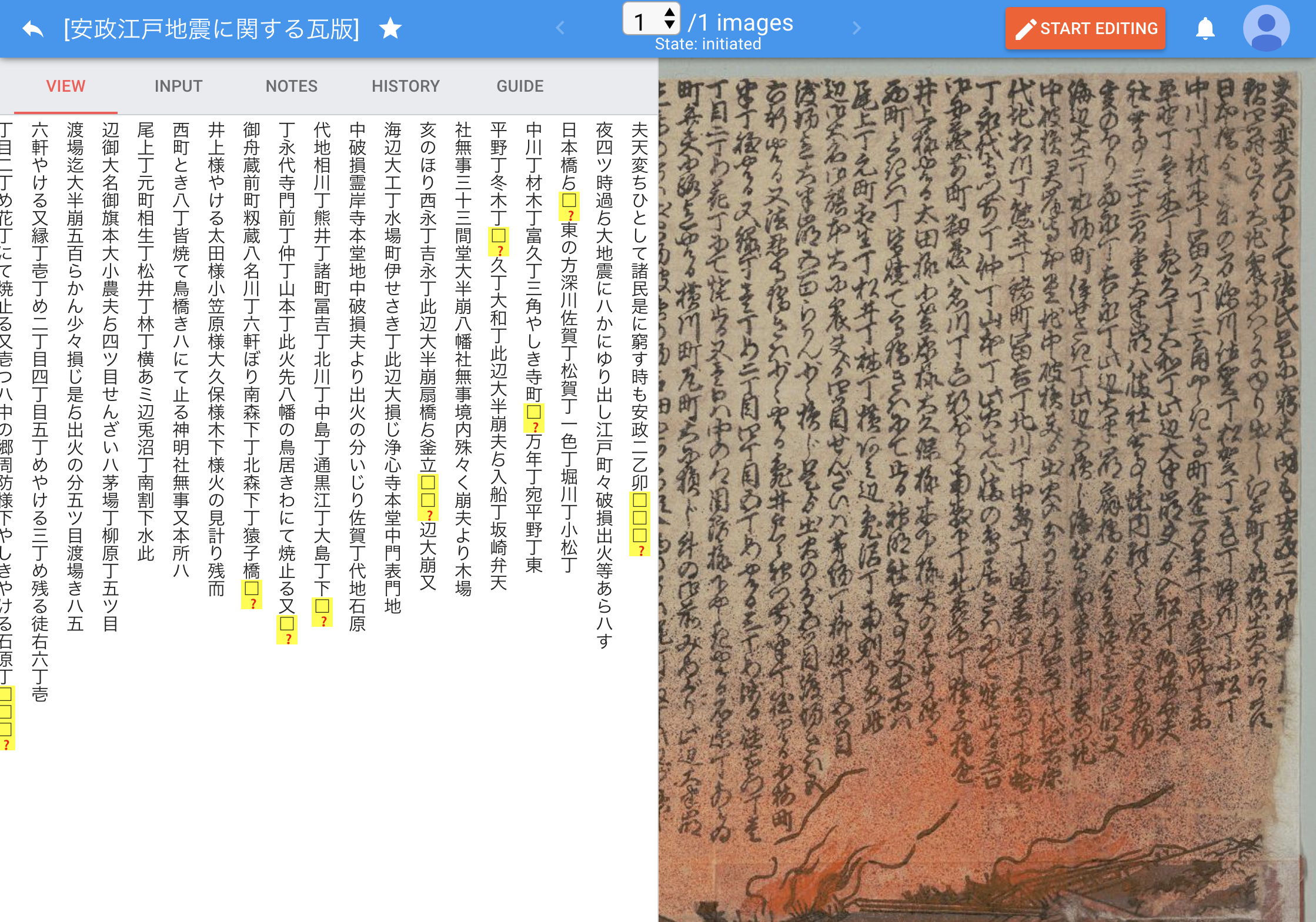 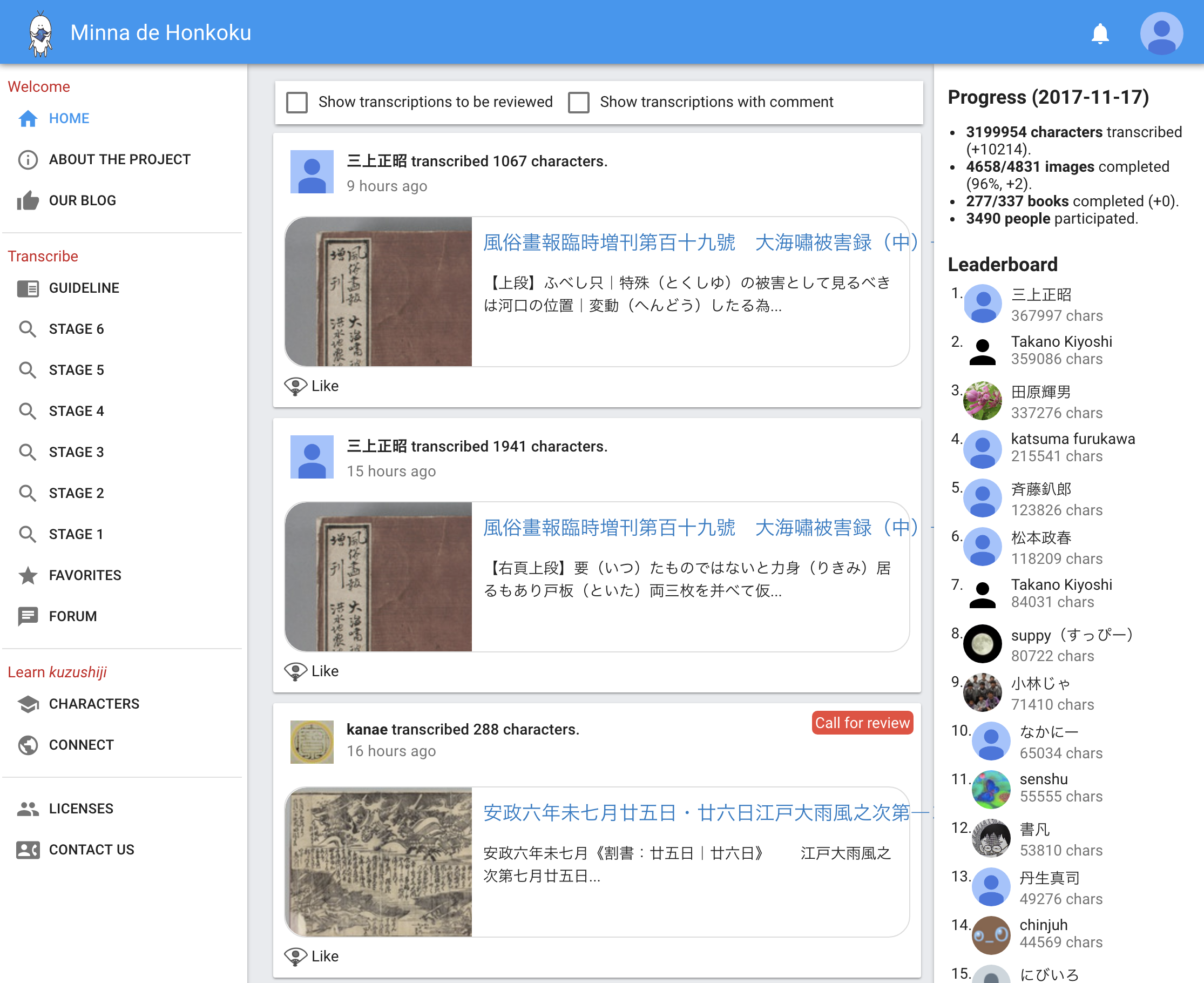 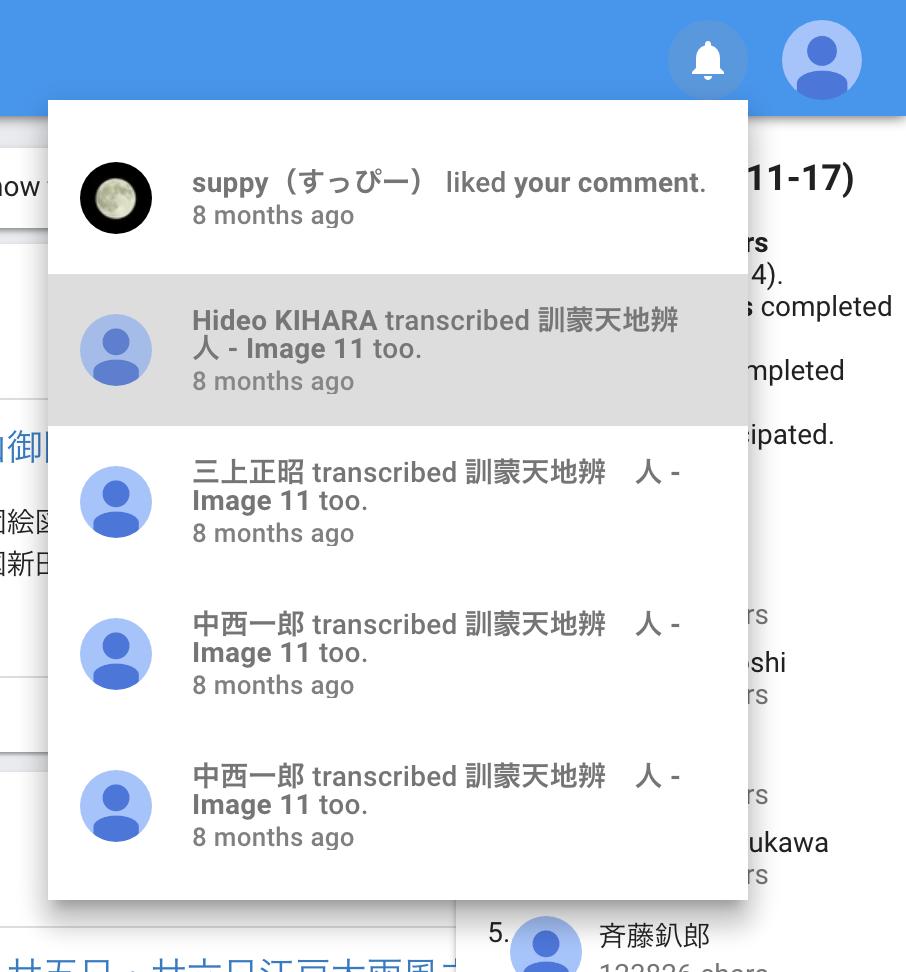 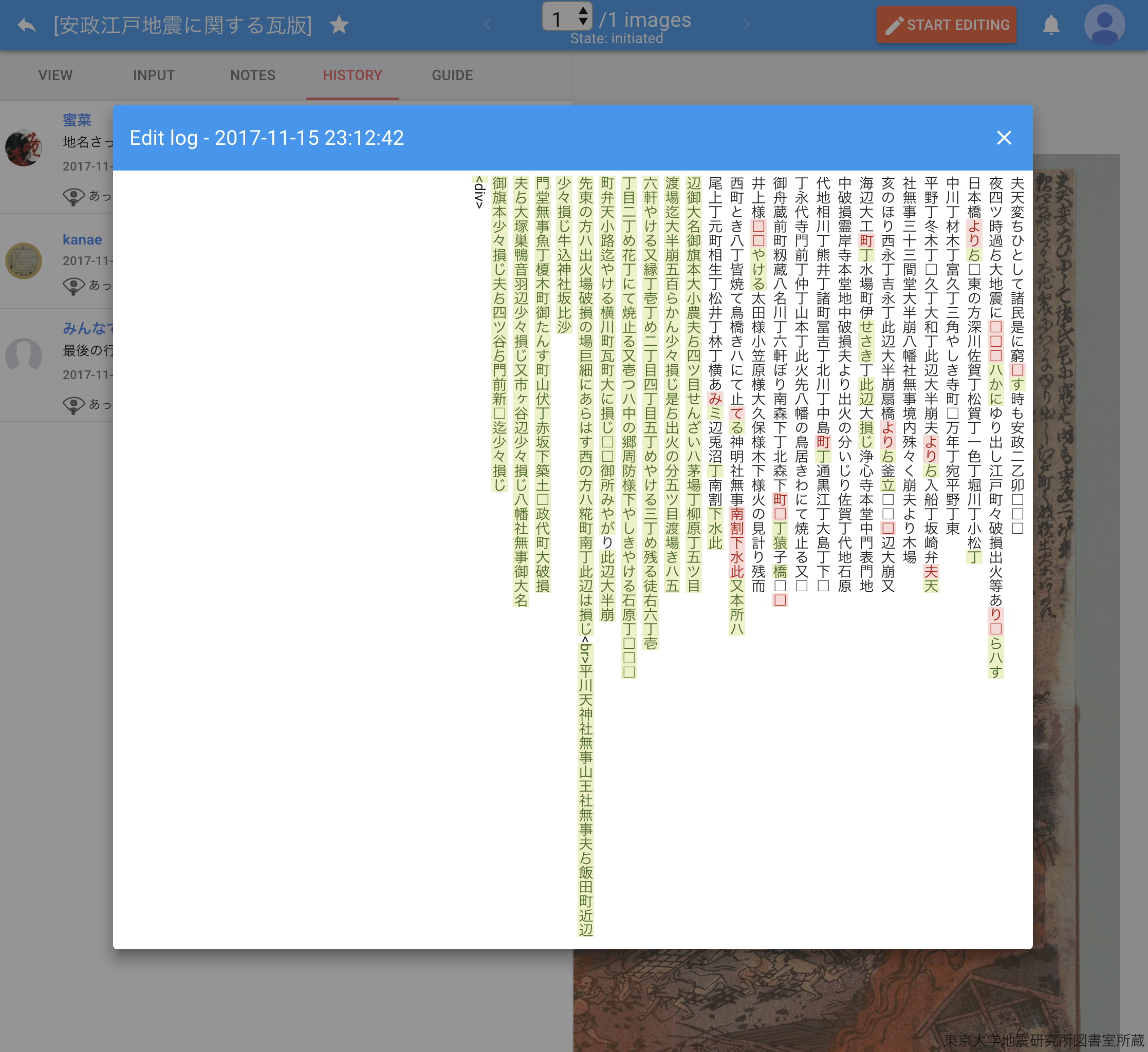 Figure 6. Corrections made by another participant (added texts are colored in green and deleted texts in red)

The website of Minna de Honkoku was launched on January 10, 2017. The transcription of 114 books (6,386 pages) from the Ishimoto Collection was completed on May 31, 2017. Thus, our initial goal was completed in less than five months since the project launch. We extended our goal and added another 223 books stored in ERI. As of November 2017, 271 books out of 337 (9,254 pages out of 9,716) including those from the Ishimoto Collection have been transcribed by volunteers. A total number of 3.12 million characters have been transcribed.

A total of 3,457 people have registered an account, and 285 of them have transcribed at least one character on the website. While we were unable to include all registered users in the transcription process, a small number of regular volunteers have eagerly contributed to the project: 35 users have transcribed more than 10,000 characters, and 6 of them more than 100,000.

4. The background and motivations of the participants

In order to understand the backgrounds and motivations of the participants, we administered an online questionnaire to them via Google Form between March 8 to May 13, 2017. We obtained responses from 64 participants. The following is a brief summary of the questionnaire results:

The results above suggest the following: (1) KuLA works effectively as an “entrance” to Minna de Honkoku, and (2) the possibilities of collaborative learning greatly motivate the participants, although the most powerful motivation is the enjoyment gained from transcribing.

In this paper, we have described the background, aim, approach, and results of Minna de Honkoku, a crowdsourced transcription of historical earthquake records of pre-modern Japan. It had been often said that crowdsourced transcription of pre-modern Japanese materials is not possible because reading kuzushiji is too difficult for non-trained volunteers. However, our learning-centered approach appears to have achieved considerable success. The same approach may also be used in many other countries that are facing difficulties in reading historical manuscripts due to changes in writing systems.

Lastly, desire to learn is one of the most fundamental characteristics of human beings, fulfilling which is one of the important roles of a scholar as a teacher. We therefore believe that considering academic crowdsourcing in the context of education will bring beneficial outcomes.