MonroeWorkToday.org, launched in November 2016, is a digital history project that synthesizes current historical research on the scope of American lynchings. The website was updated again in October 2017 with additional content digitized from Tuskegee University Archives.

Lynchings in the United States were perpetrated as homegrown acts, not orchestrated regionally in any way. This exhibit focuses on people of color murdered over 100 years in this fashion under the pretext of white supremacy. Yet unlike most academic studies, the project does not compartmentalize by region (e.g. the South or West) or by group (e.g. Mexican-Americans). By contrast,
Monroe Work Today is the first of its kind to use web technologies to visualize the entirety of these documented events, connecting scholarship about African Americans, Native Peoples, Mexicans, Sicilians and Chinese immigrants across the United States (Carrigan and Webb, 2013) (Frazier, 2015) (Pfaelzer, 2007) (Pfeifer, 2013) (and others). Through four years of work, Auut Studio meticulously created a database and directory in the form of a map, compiling all modern academic research with century-old archives of the Tuskegee Institute. This national map carries the names of 4166 victims of lynchings and nearly 600 other victims of racialized mob violence. The project gives clarity to the sheer extent of the murders.

Previous inquiries into the lynching record have relied on tabulations and statistics, enumerating one tally for each state or county – such as 531 lynchings in Georgia vs. 205 in Kentucky, etc. (Tolnay and Beck, 1995) (Guzman, c.1960) (Pfeifer, 2013). This project, however, transforms the public’s interaction with
each lynching using maps and extensive contextual narrative. Its goal is to spawn a public discussion about the logic of white supremacy.

As a second phase to the project, the author now proposes a novel approach to using GIS to understand these murders. Acts of lynching are better examined like other crime data: not as tallies, but rather as incidents with a geographic location. As the commission of overt intimidation over people of color, they were in fact perpetrated with a specific geography in mind. The terrorizing effect was intended to carry over the nearby locale: it enforced the racial order “around
here.” In this context, maps of smaller areas may better recreate the historical truth about lynching, and a geospatial visualization of the regional landscape may better illuminate the original effect of these individual violent acts.

A new computer model created by the author animates regional maps of the USA, weighting the nearby radius around a murder but also the persistence of its memory over a span of many years. The model makes certain blanket assumptions about the duration of trauma and fear–how long does the grotesque murder of a neighbor dissuade one’s actions? These are starting assumptions which the author readily admits may be
wrong, but they are coded as parameters. This allows different scholars for the first time to test their various interpretations of historical trauma and compare the visual output of competing viewpoints in the model.

This geo-temporal-visual model has the potential to drastically reframe the academic interpretation of lynching by unearthing multiple evolving shapes of the pockets of terror in the historical United States. As a stepping point for future research, this model for the broad reach of real, acute fear could be laid upon a map with other major events in the history of the Jim Crow South and brave acts of popular resistance.

In this poster session, the author will demonstrate the software model to attendees, exchange ideas and suggestions, as well as interrogate on-screen with them several new maps created with the model. 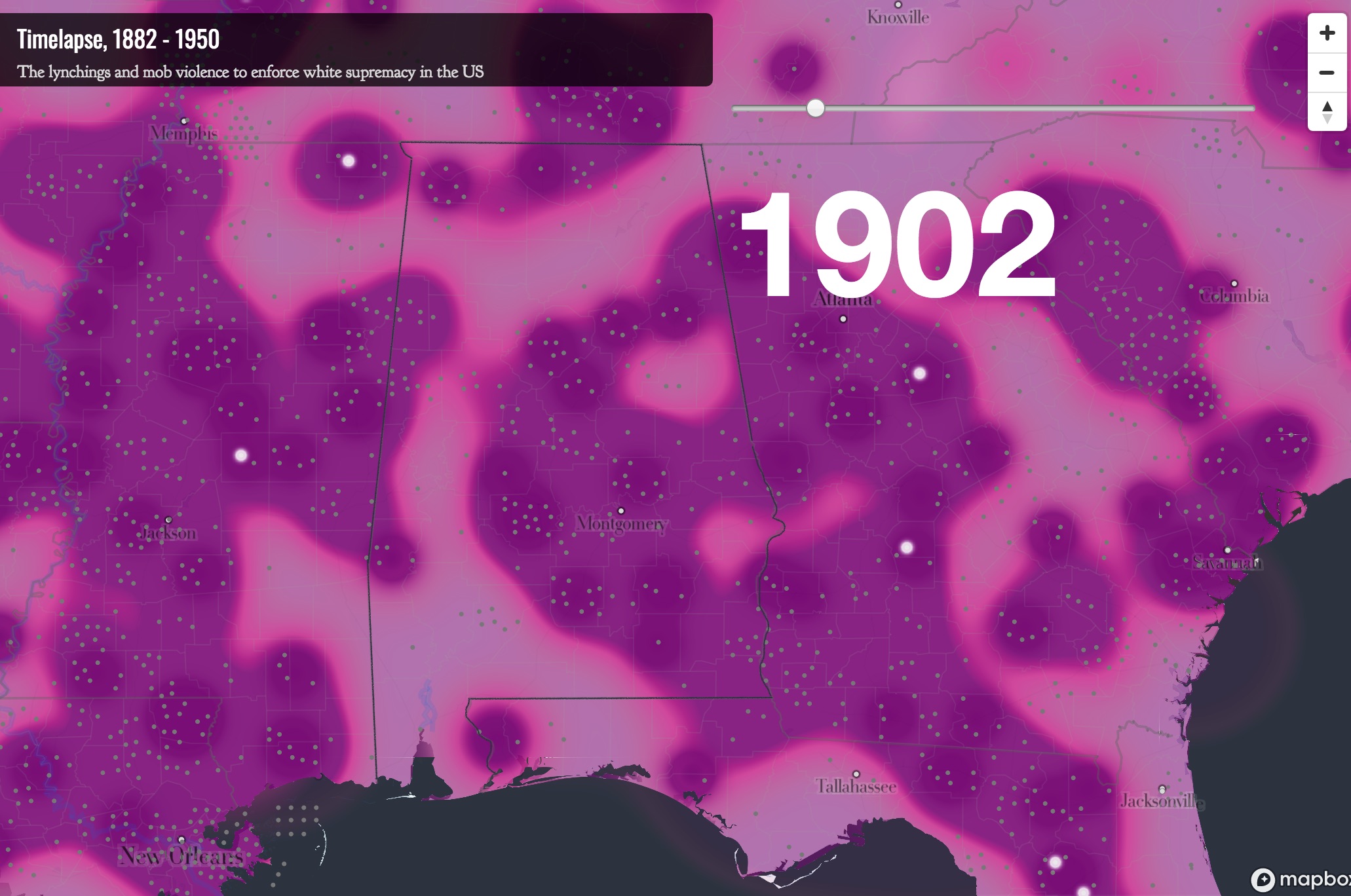