Organising the Unknown: A Concept for the Sign Classification of not yet (fully) Deciphered Writing Systems Exemplified by a Digital Sign Catalogue for Maya Hieroglyphs

How can the unknown be organised? When working with a script and language that has not been (completely) deciphered yet, primarily an inventory of all signs used must be compiled. What at first seems to be a diligent but routine piece of work, quickly turns out to be a complex classification task, for there is still much unknown. Questions arise about a signs’ use-context, the extent of the sign inventory and, above all, how the signs can be classified. Particularly the unambiguous identification of signs has some pitfalls. The difference in meaning of a sign is determined on the one hand by its graphic representation (grapheme) and on the other hand by its phonetic value (phoneme). Since the latter can only be achieved by decipherment work that has already been done, the error-free classification of undeciphered signs is a challenging task. In addition, the investigation of archaic texts creates different contexts that lead to different interpretations. The resulting hypotheses must be included in the classification and decoding tasks of a script if a resilient research basis is to be created.

In our talk we present a concept for the classification and systematisation of characters for writing systems that have not been (completely) deciphered yet. We applied this concept to the Maya hieroglyphs and created a digital sign catalogue that was developed in close interdisciplinary cooperation between epigraphy and information science and technology. The digital sign catalogue can be used to identify, systematise and classify signs and it also offers a starting point for further analyses that can present reliable deciphering.

We took an ontological approach to model the sign catalogue. To use this type of knowledge representation for the classification of signs is a novel approach to digital epigraphy.

Figure 1. Usage of logograms and syllabograms

The Maya hieroglyphic script was used between 350 BC and 1550 AD in southern Mesoamerica to record the high level language of Classic Mayan (Wichmann, 2006). The exact number of signs has not yet been determined, it varies from approximately 500 to 1000. Even though Classic Mayan is called a hieroglyphic script due to its iconic character, typologically it is a logo-syllabic writing system in which logograms and syllabograms form the main sign classes. Logograms designate specific terms, such as
PAKAL
(shield). Syllabograms represent open syllables and are also used as phonetic complements of logograms. Words could be written from logograms only (
PAKAL
), syllabograms (
pa-ka-la
), or a combination of both (
PAKAL-la
), see Fig. 1 (Montgomery, 2002). Other sign functions are numerals and diacritic signs. The signs are usually arranged within a hieroglyph block, which forms a word or a compound of morphemes, similar to Korean Hangul. However, due to its wide range of variants, Maya reveals a much greater degree of calligraphic freedom. Depending on space requirements and aesthetics, graphs can be conflated, infixed or rotated. The formation of graph variants is so complex, that it is a particular challenge to determine the grapheme of a sign.

Maya signs can be polyvalent. A sign can have more than one functional level and thus readings, either as logograms and or syllables. There is a sign labelled T528 according to Eric Thompson’s standard sign catalog for Maya writing (1962) that can be read as the logograms
TUN
(stone) and
CHAHUK
(a day name), and also as the syllable
ku
. The graph variants of this sign do not indicate which of the readings is present.

During the investigation of a not yet (fully) decoded script and language, controversial and plausible statements about the deciphering of signs emerge during the research discourse. Each deciphering hypothesis claims to be meaningful in the investigated context. For over 150 years, work has been done on deciphering the Maya script, and the ‘birth and death rate’ of deciphering-proposals is correspondingly high. The degree of decipherment nowadays ranges between 60 to 80 percent.

With our digital sign catalogue we want to establish a new concept for the systematisation and classification of signs. We chose a new and unorthodox approach that deliberately differs from previous organisational principles of linguistics and, in particular, from other (Maya) sign inventories. We have specifically questioned traditional practices in order to investigate other ways of systematising and organising signs.

Therefore, we have examined existing classification systems and linguistic terminologies in order to find suitable concepts for describing Maya signs (Department of Linguistics, 2010; Chiarcos and Sukhareva, 2015). We detected that most concepts are not applicable to the development of our catalogue, as they focus too much on the applicability in a specific linguistic context. Thus, they are not applicable to a writing system with a fair deciphering degree, since they are simply not known yet. For this reason, we want to create an organisation system for describing, classifying, and systematising the signs, using linguistic categories only on a meta level and not taking further analysis levels and grammars into account.

The decipherment of Maya signs can only be done by linguistic analyses on the basis of a corpus. To be able to create such a corpus, the signs used in the texts must be identified. In order to allow the processes of sign identification and subsequent text analysis to be interlinked, an organisational system is required that can react flexibly to changes. We achieve the necessary flexibility through ontological-based modelling. To optimally represent the semantic relations between the described entities, the data model of the sign catalogue was implemented in RDF. The documentation of signs in an ontologically based knowledge organisation system has not been done in Maya epigraphy yet and thus represents a new approach in the exploration of this script.

In our catalogue w
e define the sign as an entity consisting of a functional and phonemic level and a graphical representation. We modelled the class
Graph

which represents all variants of a grapheme (allographs). By the separate recording of discrete graphs we enable an exact method for their identification. Based on preliminary work by the research community (Kelley, 1962; Houston, 2001), for the first time we were able to develop rules and principles on creation of graph variants of Maya signs. 45 variation types in total were defined, which are subdivided into nine classes.


The
Graph
-class is set in relation to the functional and phonemic level of the sign (the class
Sign
, see Fig. 2). This relation is optional, so that even graphs can be recorded that could not have been assigned to any sign yet.

Figure 2. Sign 126 with graph variants bh and br, and phonetic value /ya/

The class
Sign
is determined by its function: the use of the sign as a logogram, syllabogram, numeral, or diacritic. The phonemic level of the sign is recorded as the transliteration value with the respective
SignFunction
. Only one value is allowed per function, but one sign can have several sign functions and therefore readings.

In Maya epigraphy, signs that have not yet been deciphered arouse a lively discourse, from which constantly new proposals for their reading emerge. We are faced with the challenge of not only documenting existing as well as our own deciphering hypotheses, but also evaluating and classifying them qualitatively in such a way that they can withstand a critical examination and be used for further (linguistic) analyses. The hypotheses have different quality levels. Some seem more plausible than others. In order to make the quality of the readings formally assessable, we have developed a set of criteria for each sign function, which is oriented, among other things, to the context of use (e. g. plausible text-image-reference) or the proof in modern Mayan languages.


The criteria are related by means of propositional logic so that, depending on their combination, a quality level is
determined
. To represent these in the model, we developed the class
ConfidenceLevel

that is related to the
SignFunction
-class. Therefore, a qualitative evaluation can be made for the transliteration value (see Fig. 3). 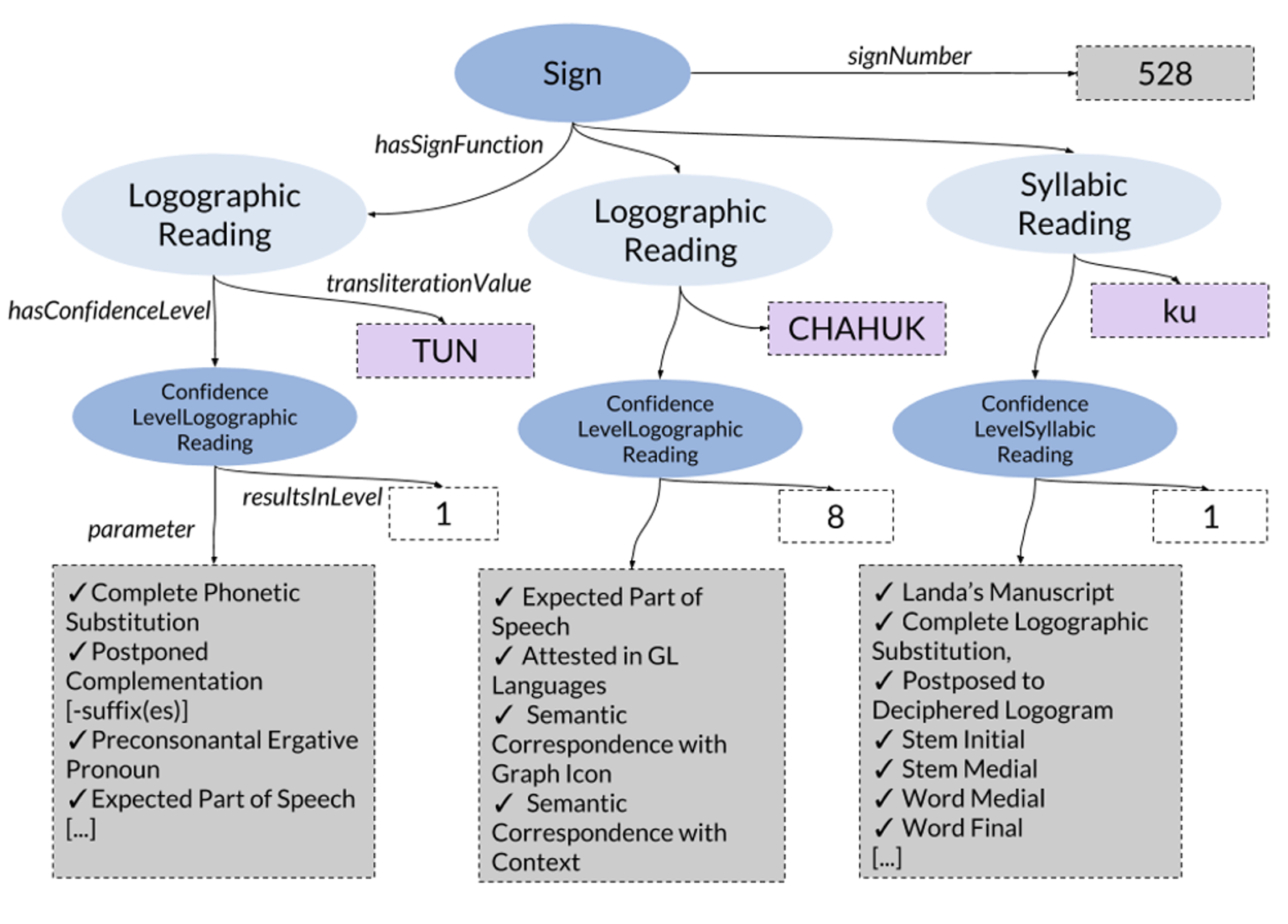 The qualitative evaluation is particularly relevant to examine the plausibility of reading hypotheses in a corpus. Readings with a high level can be compared with those with a low level. New criteria for the plausibility could always be found in other texts and can then be added to the sign catalogue. This may also increase the quality level of the transliteration value.

Since the concept distinguishes itself specifically from the classification of signs in linguistic categories, it is also transferable to other languages that have not yet been (completely) deciphered or under debate regarding their nature, e.g. Nahuatl, Elamite, Indus, or
Rongorongo writing
. In particular, the separation of the sign in a graphic and a functional-phonemic level – that can be related to each other depending on the level of knowledge – offers a flexibility that redefines the classification of signs and allows precise identification on the basis of distinguishing characteristics. The ontological modelling approach and the implementation in a RDF data model enables new insights into character classification. By incorporating known and adapting new results, the digital sign catalogue is specifically designed to deal with ambiguousness in research processes.

Bibliography
Notes
1.
mono-, bi-, tri-, and variopartite, division, animation head, animation figure, multiplication and extraction
2.
Notice that these criteria can only be derived from the deciphering work already carried out.