Recent results of computer-aided research suggest that characters in novels – measured by their character speech – can be laid out stylistically distinct from other characters of the same novel (Hoover, 2017; Fields, Bassist, Roper, 2017). Thus, experienced authors are able to create characters with ‘distinctive voices’ which can be identified by word frequencies. Unlike stylometrically determined signals in respect to author, genre or period, it is then an intratextual criterion for similarity and disparity. The study’s subject is therefore not a large text corpus of different authors and periods, but a single literary text that comes into analytical focus. This approach to text selection is oftentimes called ‘microanalysis’ (Hoover, 2017). The term does not only differ from buzzwords such as ‘big data’, it also emphasizes the differences to concepts such as ‘macroanalysis’ (Jockers, 2013) and ‘distant reading’ (Moretti, 2000; 2005) despite their comparable quantitative techniques.

Surprisingly, studies on the stylistic differentiation of character speech are mostly limited to novels even though the structure of dramatic texts makes a quantitative examination of dramatic character speech easier: The speech is neither sorted nor commented nor framed by a narrator. By consequence and in contrast to narrative texts, the character speech can be isolated automatically. Initial approaches are already available: E.g., John Burrows and Hugh Craig show that individual drama characters can indeed be successfully assigned to an author’s signal (Burrows, Craig, 2012). Both argue against critics who question a successful attribution of dramatic texts to an author, as Masten (1997) does who claims that the lack of narrators would lead to many indistinguishable voices.

is based on David Hoover’s approach in
The Microanalysis of Style Variation (2017) but is applied to the genre of drama. The hierarchical cluster analysis in
Figure 1 illustrates the various characters of Gotthold Ephraim Lessing’s
Minna von Barnhelm,
oder das Soldatenglück (1767) in regard to their similarity. As one of the plays of “Lessing’s maturity” (Worvill, 2005: 177)
Minna von Barnhelm seems to be an appropriate drama to discuss its characters and their speech. Michael Metzger, e.g., argues that Lessing created “a characteristic pattern of language for each of the various roles he has written” (Metzger, 1966: 196; see also Worvill, 2005; Asmuth, 2009).

The stylometric analysis is based on word frequency lists which are extracted from the individual characters’ utterances. With the help of ‘Cosine Delta’, that is claimed to achieve more reliable results than ‘Burrows’s’ or Argamon’s Delta’ (Evert et al., 2017), the speeches’ relative stylistic similarity is calculated by means of word frequencies. Contrary to Hoover’s approach, the character speech is not divided into artificial segments of 1500 words each but by its ‘naturally given’ act boundaries.

This is helpful for the interpretation of the stylometric results based on the conditions of their emergence, such as the co-presence of characters. The procedure’s disadvantages are the speech segments’ inconsistencies: Some segments fall below a length of 700 words and must be excluded.

It also eliminates the so-called possibility of ‘randomization’, as it is practiced by Hoover: the individual character speeches’ word distribution is randomly assigned to the segments in order to ‘normalize’ outliers. However, one should be cautious regarding the random distribution of words since potentially better results can only be measured by the underlying hypothesis. 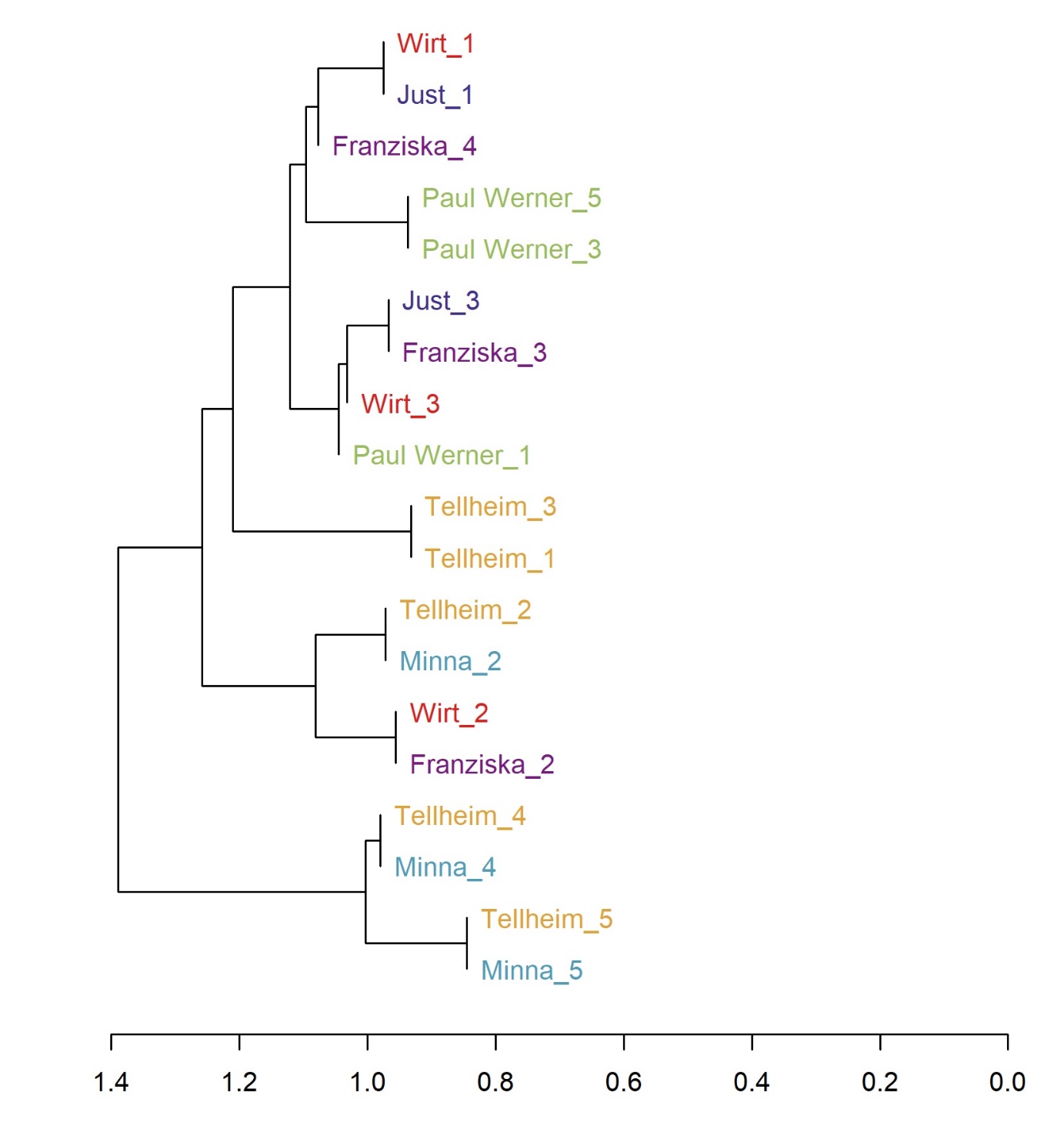 Minna von Barnhelm’s stylometric analysis indicates certain signs of stylistically distinctive character speech: E.g., Tellheim’s speech – he is the male protagonist of the play – from Act 1 and 3 is grouped in immediate vicinity. The same holds true for the speech in Act 3 and 5 taken from Paul Werner. However, most of the speech segments seem to follow a different criterion. This is particularly evident for the uppermost section of the chart: The speeches by Major Tellheim, Minna von Barnhelm, Franziska (Minna’s chambermaid) and the landlord (Wirt) are grouped on a contiguous branch, i.e. they resemble the other segments stylistically. Those four segments of speech belong to the drama’s second act. There are other examples that seem to confirm act boundaries as an important factor for the analysis’ results. The most striking ones are those of Tellheim and Minna in both Act 4 and 5. The analysis shows that the results by Hoover, Fields, Bassist and Roper cannot be transferred to Lessing’s dramatic text directly.

A single dendrogram, however, must not be more than a first indication for the assessment of the hypothesis. To avoid a potential ‘cherry picking’ problem at this point, further stylometric analyses on an expanded corpus were conducted. 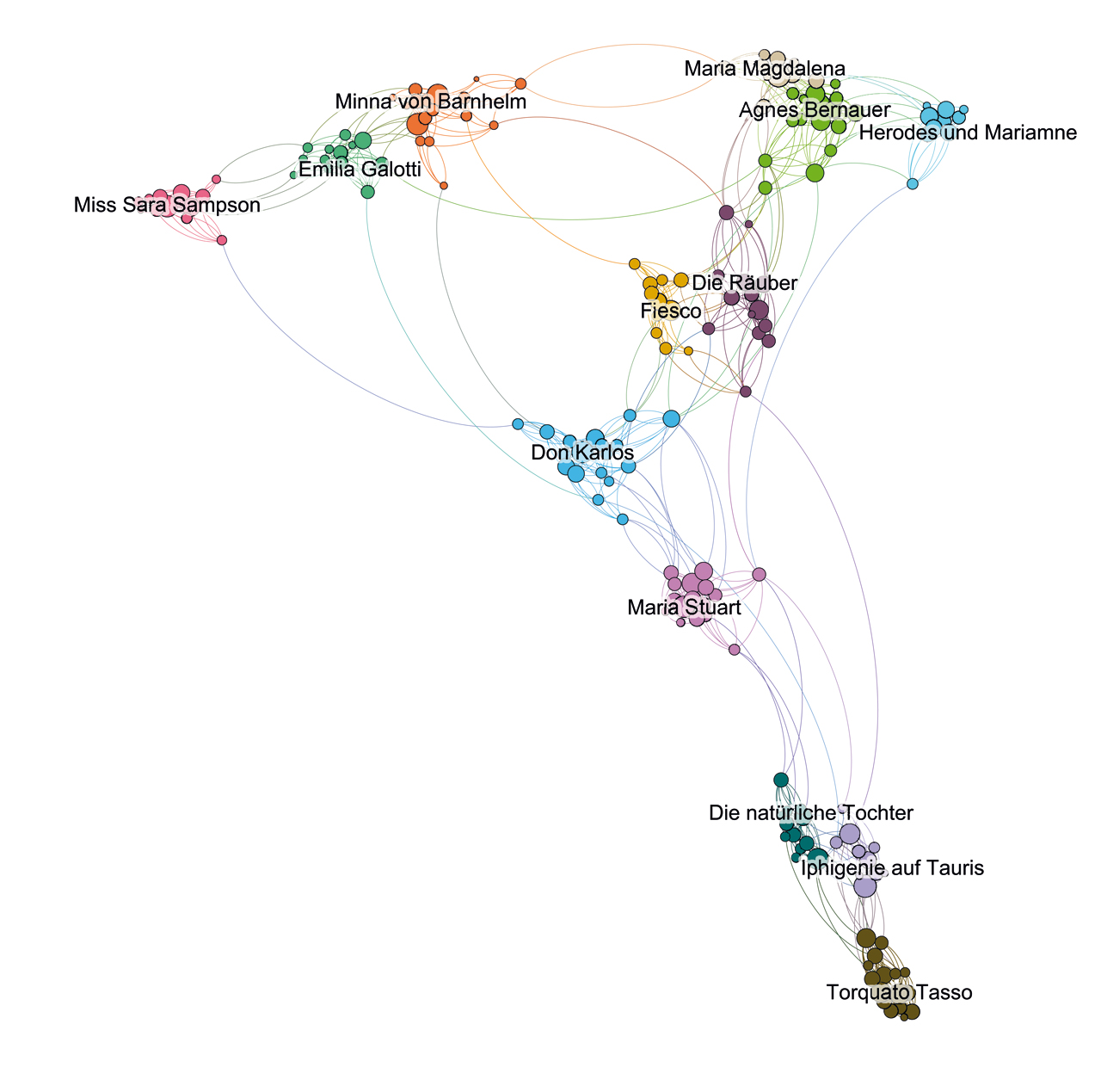 Stylometrics are not the only method to determine relative similarities within a text corpus. The extent to which they are suitable to discuss open questions – in contrast to, e.g., author attribution – remains to be examined. If parameters such as distance measures, word size or culling must be redefined with respect to the text corpus, ‘cherry picking’ would then become inherent to the method (Schöch, 2014; Jannidis 2014; Eder, 2013). It is therefore necessary to compare the established observations to other quantitative methods. This is done by means of analyzing co-presence and semantics of character speech.

Figure 3 illustrates the speech parts of the six most important characters in Lessing’s
Minna von Barnhelm. The following investigation focuses on the protagonists Tellheim and Minna. In the second, but especially in the fourth and fifth act, Tellheim and Minna are mainly co-present. This structural data correlates with the observations in
Figure 1. The speech segments of those acts are grouped closely together, while Tellheim’s speech in Act 1 and 3 is clearly separated. In these two acts Tellheim and Minna are not co-present.

The observation that stylistic similarities of the character speech is related to structural characteristics challenges earlier research and demands further investigation: Is it possible to expand or specify this finding? A semantic word field analysis, as used by Willand and Reiter (2017), serves to operationalize the thematic conception of character speeches.


Figure 4 illustrates two diagrams that compare different segments of Tellheim’s and Minna’s speech. The figure on the left compares Tellheim’s speech in Act 1 and 5. It indicates significant semantic differences in those segments that also showed little similarity in terms of style. The themes ‘love’ and ‘ratio’ are given greater weight in Act 5, while the context of ‘family’ is invoked less frequently. All in all, one can clearly detect a discrepancy in the semantic fields’ word frequencies.

The diagram on the right shows the semantic fields of Minna and Tellheim in the fifth act. Compared to the diagram on the left, the two speeches of Tellheim and Minna seem to correlate better with each other, especially considering the word fields ‘love’ and ‘ratio’. None of the word fields is conspicuous due to extreme differences. Whether this observation can actually be used as a marker for similar topics or not has to be proofed within a larger text corpus. By consequence, this would be useful to determine a threshold value to mark similarity and disparity. I started this task using the Euclidean distance to measure the similarity between different segments of character speech in
Minna von Barnhelm. It results in the following values of similarity:

The difference of the two groups’ average margin is a value of 0,00332, or 38,2 percent. Although the sample size is still small, one dramatic text only, this seems to be quite a significant result. Thus, the word field semantics do at least provide an indication that style, theme and presence of characters are related to some extent.

A closer examination of the character speech in
Minna von Barnhelm has shown that it is plausible to combine different analytical methods. Thus, the investigation benefits from their respective strengths. Herein, results can be validated and opened for broader questions. In the chosen dramas, co-presence seems to have an impact not only on style but also on the semantics of character speech. The segments spoken by the two protagonists in Act 5 of
Minna von Barnhelm exemplify this thesis. These results differ from Hoover’s and suggest having a closer look on co-presence and its influence on the distinctiveness of character speeches in dramas as well as in novels. The absence of a narrator in dramatic texts is one possible starting point to explain the differences outlined in this paper.

The act boundaries are marked with underscores in the illustration.

To compare: Fields, Bassist and Roper use segments of only 200 words each.

Although some speech segments fall below a length of 1000 words, it should still be feasible to use a vector length of 1000 MFW (Eder, 2017b). The results of
Figure 2 support this hypothesis, but a larger scale study on this topic is a future task.

I analyzed 13 texts – three by Lessing, four by Friedrich Schiller, three by Johann Wolfgang Goethe and three by Friedrich Hebbel – with a total of 175 speech segments. Parameters used: 1000 MFW, no culling, Cosine Delta, Ward Clustering. The visualization is not shown in the paper.

See Eder (2017a) for advantages of stylometrics visualized by network plots.

For this purpose, five dictionaries on the topics of family, war, love, ratio and religion were created, enlisting 65 to 110 words each. The words were used in dramas between 1770 and 1830 (Willand, Reiter 2017).