Digital resources in poetry in Spanish are scarce, particularly for certain periods. This poses difficulties for Digital Humanities studies in Spanish.

This paper describes the DISCO corpus and how it complements available digital materials for poetry in Spanish in several respects: First, the author and period range. Second, metadata concerning the authors and their works expressed in TEI-RDFa, given the importance of interoperability between literary datasets and the advantages of Linked Open Data as a paradigm. Finally, example findings that can be obtained with our corpus are provided, regarding metrical patterns diachronically.

The corpus is available on GitHub

extracted from HTML sources at Biblioteca Virtual Cervantes (García, 2005, 2006a, 2006b) and Wikisource. Sonnets were chosen given the form’s importance in European poetry, where it is even considered as its own genre. The form’s clear restrictions make it easily amenable to computational treatment, facilitating meaningful comparison across poems. Several computational linguistics studies on the sonnet exist (Navarro-Colorado et al., 2015, 2016, 2017a, 2017b; Agirrezabal, 2017). A new sonnet corpus complements earlier work on both traditional and computational poetry analyses.

We focused on canonical and non-canonical authors, from different Spanish-speaking countries (Figure 1). 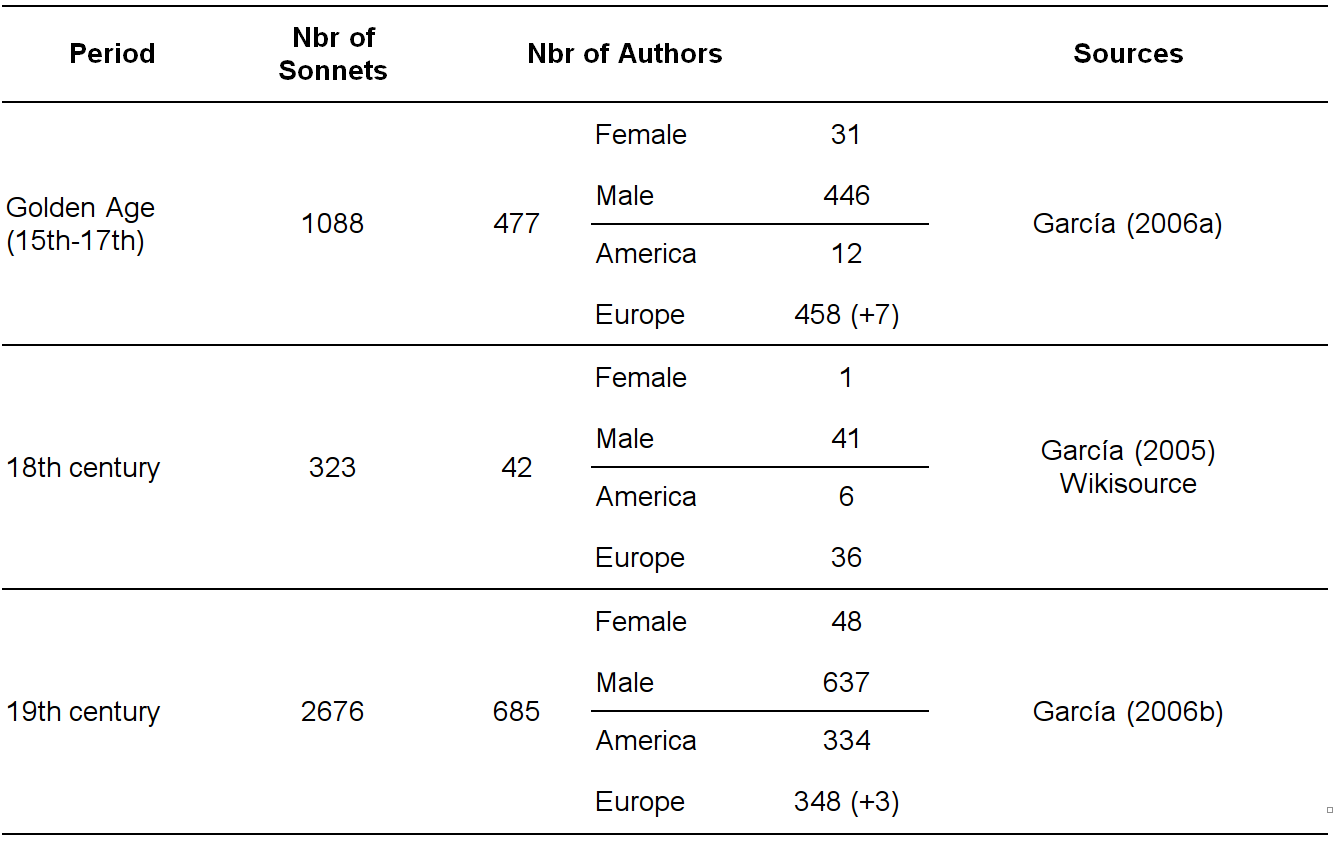 Figure 1. Sonnet and author distribution per period, including the number of female and male authors, and the continent where they developed their literary activity. Numbers in parentheses indicate authors which were probably active in Europe.

The poems are encoded in XML-TEI P5. A plain-text version is also provided. Together with the TEI-semantics, this corpus provides a layer of Linked Open Data (LOD) expressed in RDFa (Herman et al., 2015). To our knowledge, no out-of-the-box tools exist for publishing literary TEI corpora as LOD.

In this context, the enrichment of TEI with RDFa attributes is a solid approach to translate TEI semantics to the web (see precedents like Jewell, 2010) and benefit from the wide range of possibilities of the Semantic Web: First, we enrich our dataset by linking to third-party ones (as DBpedia), providing additional resources to complement the corpus. Second, we publish our data openly using standard schemas, thus supplying semantic interoperability that allows third-party applications to automatically use our data.


Author metadata were extracted or inferred from unstructured source content, and specified in the teiHeader: Year, place of birth and death, and gender. Two versions of the texts are available: one collecting every sonnet per author, the other with a single sonnet per file.

For the current corpus release we augmented the TEI annotation with URIs and class/property information, expressing them in RDFa. The most straightforward information concerns authors and their works, and the DCMI Metadata Terms (DCMI Usage Board, 2012) provides an appropriate scheme. Most features regarding authors’ biographical data were formalised with the FOAF vocabulary (Brickley and Miller, 2014). Links to other resources were supplied. For instance, authors were assigned
Virtual International Authority File (VIAF) identifiers, by querying VIAF’s API supplemented with manual validation. Since the corpus includes non-canonical authors, LOD is an important asset to share their work thanks to the enhanced display of this type of data implemented by search engines.


Using the
met attribute, each line was annotated for scansion (strong and weak syllables) with the ADSO tool

(Navarro-Colorado, 2017), which specializes in Spanish fixed-meter forms, attaining a performance of 0.95 F1. A heuristic was used to automatically annotate the quatrains’ rhyme-scheme, i.e. enclosed (ABBA) or alternate (ABAB).

Using an
enjamb attribute, lines were annotated for enjambment

with the ANJA tool

(Ruiz-Fabo et al., 2017). The tool’s performance at detecting enjambment is above 0.8 F1, and its efficacy at classifying enjambment types varies across periods and types. A
cert attribute specifies the expected certitude for each enjambment type annotated.

The metadata mentioned in 2.2. were unavailable in structured, machine-readable format in the corpus sources, or in other sonnet collections, like Sonnet-Archiv (Elf Edition). Regarding coverage, the corpus complements Navarro-Colorado et al’s (2015) Golden Age Sonnet corpus, by including minor Golden Age authors. For later periods, we cover more poems and authors than existing digital corpora, up to the 19th century. Our corpus integrates RDFa annotations, which in a second version will be fully compliant with the POSTDATA model.

This is a pioneering model that will provide means to publish European poetry materials as Linked Open Data. Finally, combining the annotation of metrical patterns, stanza types and enjambment is not offered by prior corpora.

Regarding diachronic data on the number of stressed positions (Figure 2), patterns with three stresses are highly used across periods. However, most a maiori patterns with four stresses decrease in the 19th century. This might indicate a 19th-century preference for “lighter” patterns, with stresses further apart from each other.

Whereas the predominant meter for sonnets is naturally the hendecasyllable, alexandrines 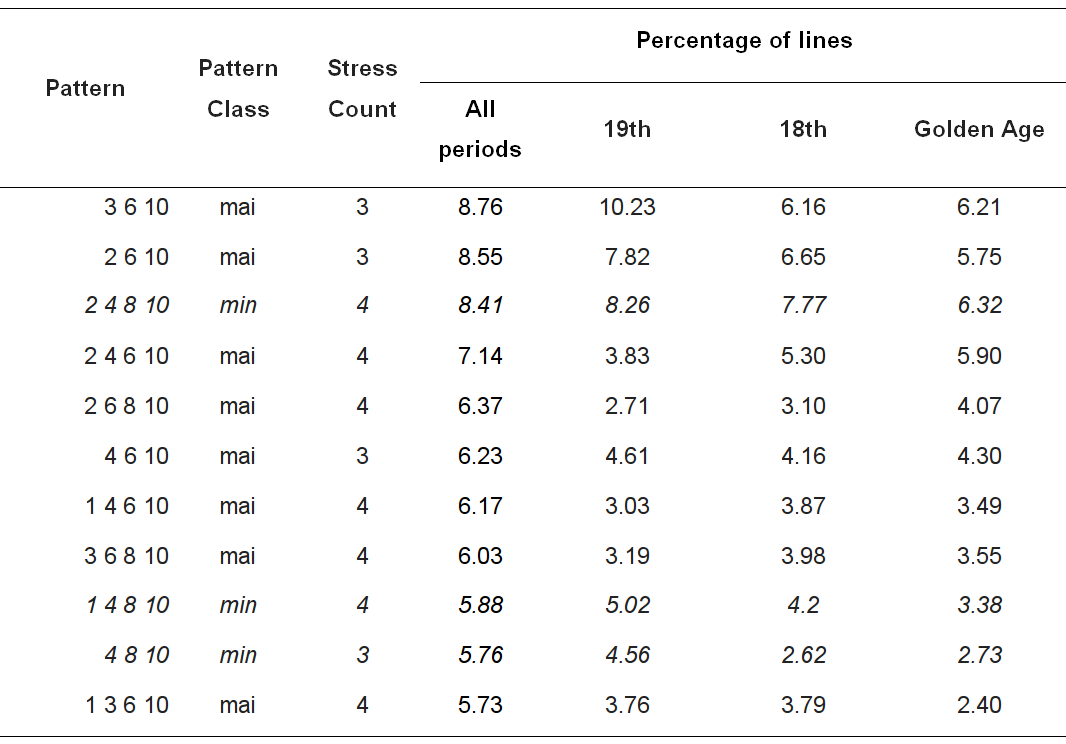 Figure 2. Distribution of stress patterns per period (percentage of lines for each pattern) for the 10 most frequent patterns in the corpus, sorted by decreasing percentage of occurrence in the complete corpus. Pattern classes are also provided (
mai:
a maiori, i.e. stress on 6th syllable,
min:
a minori, i.e. stress on 4th and 8th syllable). Rows for
a minori patterns are in italics.
Stress count refers to the number of stresses in the pattern. Patterns with three stresses are widely used in any period. Most
a maiori patterns with 4 stresses decrease in the 19th century, whereas
a minori patterns increase in that century. 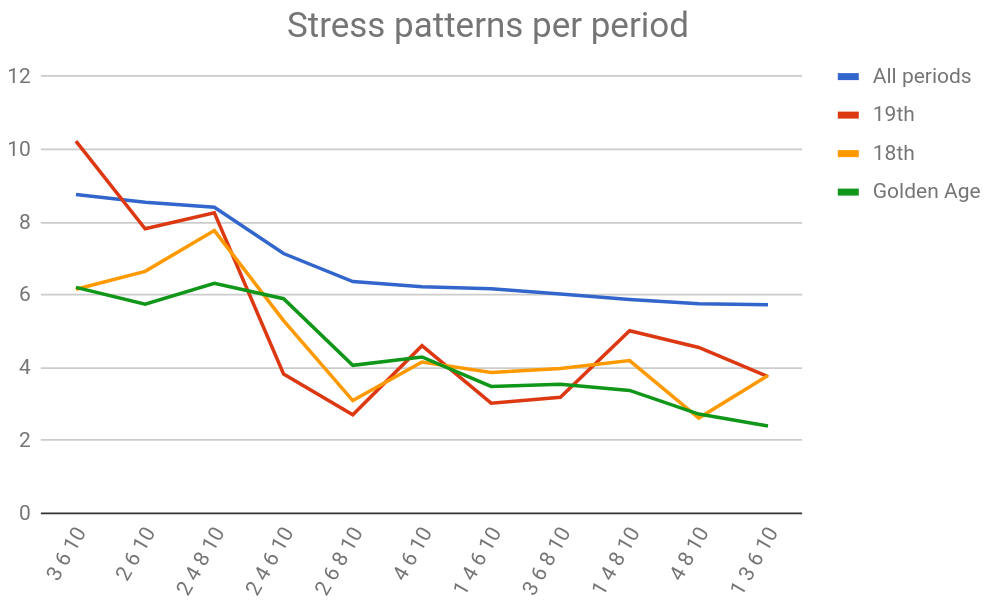 Figure 3. Distribution of stress patterns per period (percentage of lines for each pattern) for the 11 most frequent patterns in the corpus.
[Page] 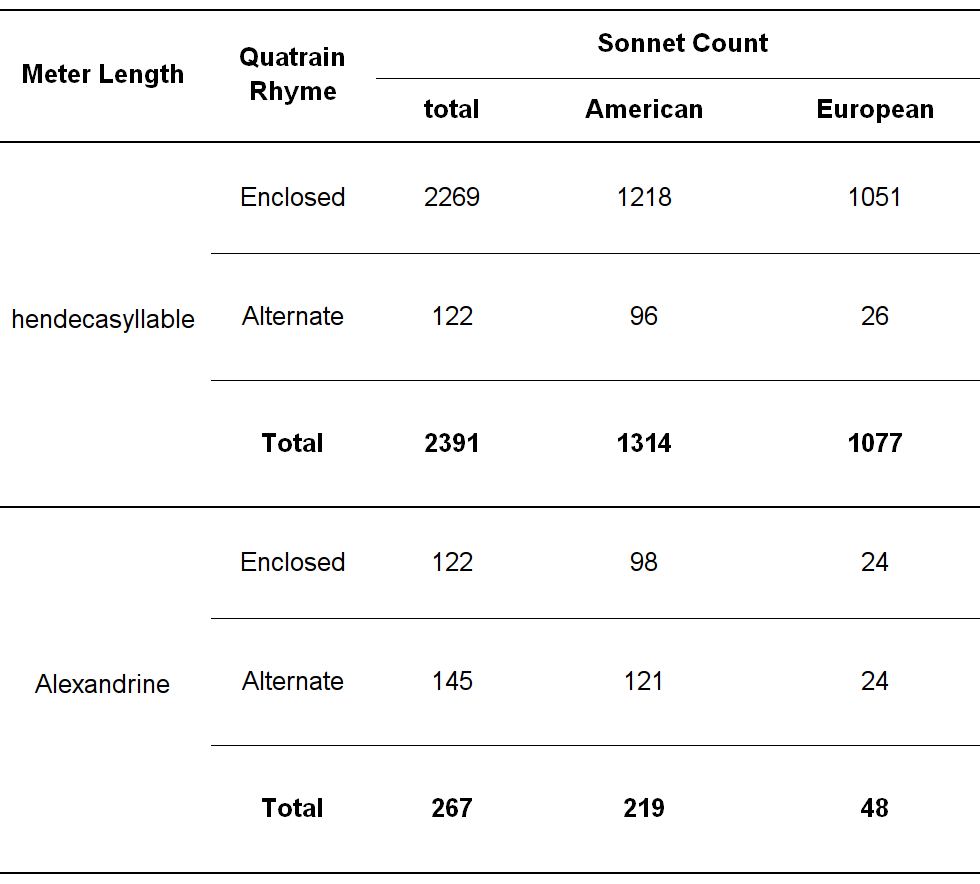 Supported by the project ‘Poetry Standardization and Linked Open Data: POSTDATA’ (ERC-2015-STG-679528), funded by the European Research Council (ERC) under the European Union’s Horizon 2020 research and innovation programme, and led as a Principal Investigator by Dr. Elena González-Blanco, LINHD-UNED (
http://postdata.linhd.es/).

About 125 sonnets by approx. 20 authors whose production took place in the early 20th century (with date of death prior to 1936) are also included in the corpus; the documentation on the GitHub repository (footnote 1 above) provides more details.

Whereas the publication of literary corpora in Linked Open Data formats is not widespread, inspiration could be drawn from the linguistics community, which has been especially successful in building the means to convert resources with linguistic annotations to the Resource Description Framework model (see McCrae et al., 2011; Chiarcos and Ejavec, 2011). In addition, more general projects, not limited to linguistic analysis, are being developed as well: see work on building a TEI ontology in Ciotti et al (2016).

The tool detects different types of enjambment (i.e. a mismatch between syntactic and metrical structure) as characterized by Quilis (1964). The tool also detect’s Spang’s (1983) concept of
enlace, which takes place when a subject or direct object occur in a line adjacent to their governing verb’s line, and which triggers a less noticeable effect than the enjambment types defined by Quilis

See Domínguez Caparrós (2014: 143) or Henríquez Ureña (1919: 132) for details on
a maiori and
a minori patterns. The main
a maiori variants as described in previous literature are 2 6 10 and 3 6 10; this is confirmed in our data. Patterns are formalized as a series of numbers indicating stressed syllables, e.g. 2 6 10 for the second, sixth and tenth syllables. Note that 10th-syllable stress is mandatory in all patterns.

In Spanish, the alexandrine has 14 metrical syllables. In sonnets, the hendecasyllable predominates almost exclusively. However, particularly since the 19th century, alexandrine sonnets have been written.