An understanding of the intellectual and social structures of Digital Humanities (DH) has been sought by many scholars; some have pointed to the potential usefulness of quantitative methods in such analyses (McCarty, 2003; Terras et al., 2013). A few existing studies have applied quantitative methodologies to analyse publication, conference and social media data (e.g. Nyhan and Duke-Williams, 2014; Weingart, 2016; Grandjean, 2016). This study not only incorporates such approaches but extends them by integrating new analysis and visualisation methods into the wider study of DH’s intellectual and social structures.

In this paper, we will introduce research on the citation and social network of DH that is giving rise to new understandings of the field’s community structure; scholarly interactions; disciplinary development; and formal/informal communication channels. The citation network of Author Co-Citation Analysis (ACA) comprises 22,321 cited authors across 52,823 cited references from the three core DH journals, while the social network of Twitter Co-Retweet Analysis comprises 3,160 Twitter users and 5,929,609 tweets. To the best of our knowledge, this study is the first to combine bibliometric and social network methods to visualise and compare the DH communities and to uncover their histories. This research contributes to ongoing discussions and debates about the DH knowledge and community structures (Gold and Klein, 2016).

The Author Co-Citation network study was presented at DH2017; this paper extends this earlier analysis. For reasons of clarity, we here give a brief overview of this research. The network has been constructed by collecting the citation data of three core DH journals up to December 2016: Computers and the Humanities ( CHum), Digital Scholarship in the Humanities ( DSH) and Digital Humanities Quarterly ( DHQ). 2,582 articles with 52,823 cited references were collected (see Figure 1). 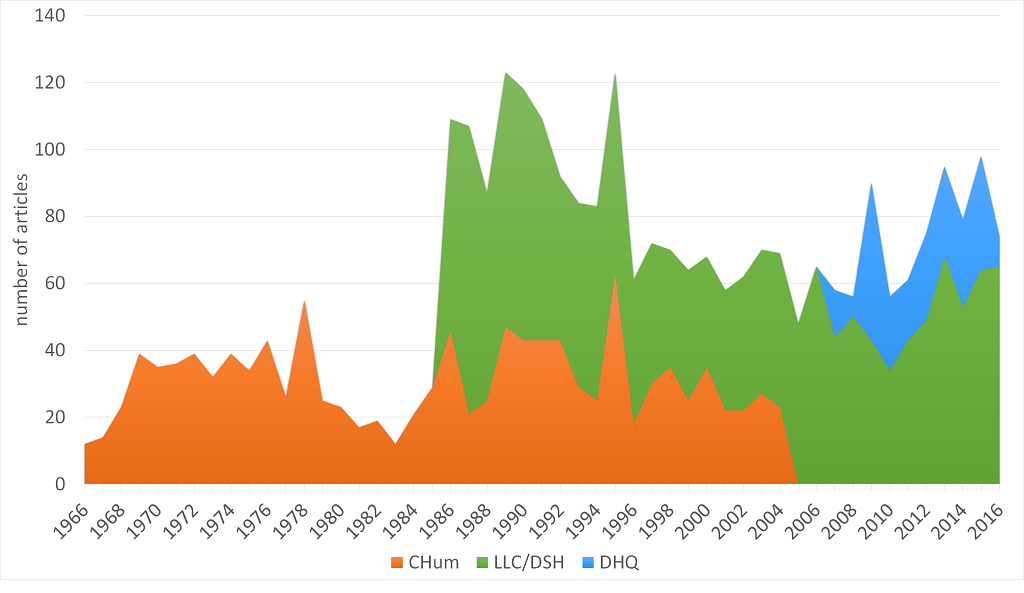 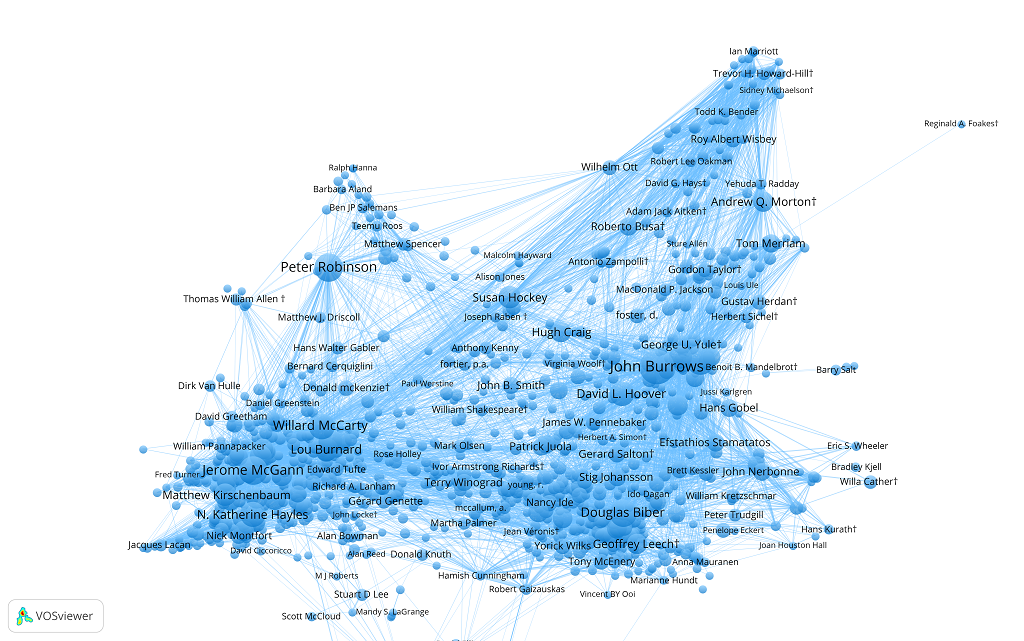 We have selected all the Twitter users that are followed by the Alliance of Digital Humanities Organisations (ADHO) and its member organisations’ (see http://adho.org/) Twitter accounts. As dynamic and interdisciplinary as the DH community, it is often difficult and subjective to select the users by their account descriptions. In contrast, the following relationships by the DH organisations indicate more genuine and representative identification. A total of 3,160 unique users have been collected along with all the 6 million tweets from 21/03/2006 when Twitter was created up to 22:00 (GMT) on 5/11/2017 (see Figure 3). 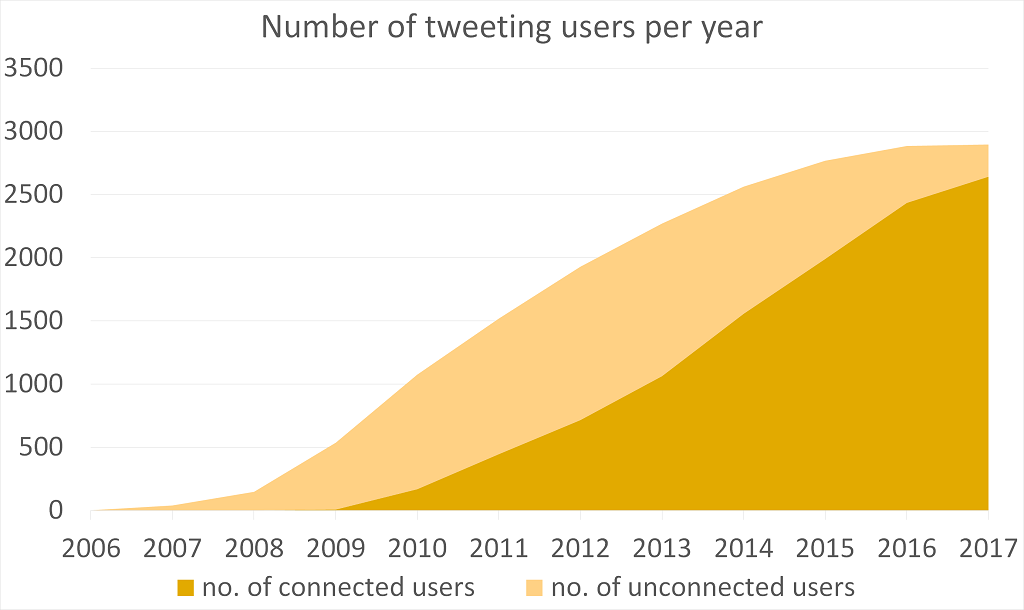 Similar to the citation network method, the Twitter user Co-Retweet network has been constructed by calculating the number of non-self-retweets the user received ( non-self-retweet count), and the number of same tweets that two users both retweeted ( co-retweet count) for the weights of the nodes and links respectively. The network resulting visualisations are shown on Figure 4. 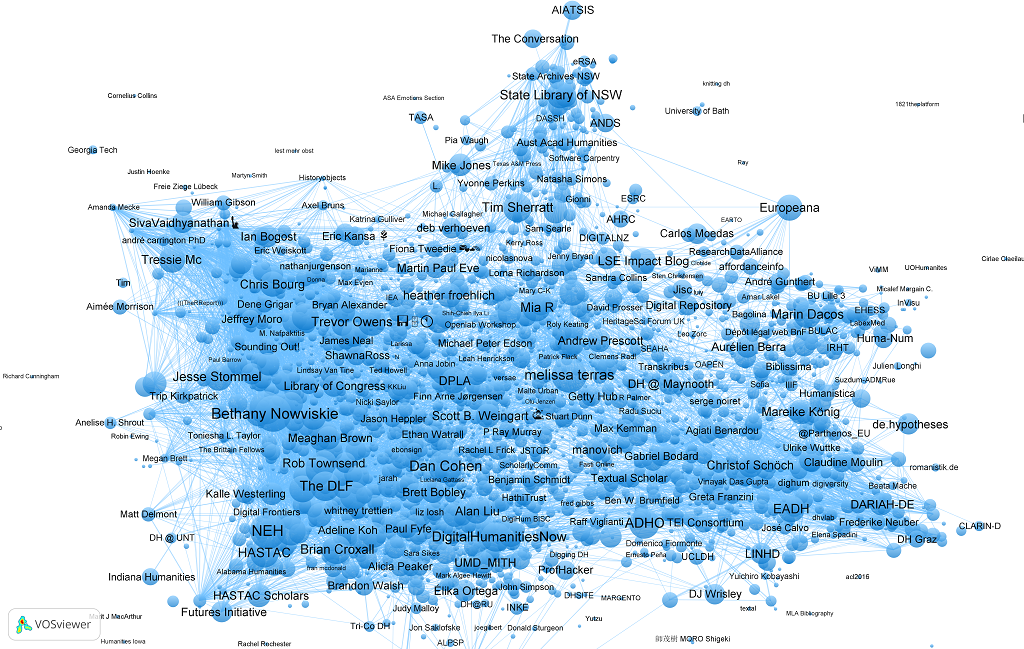 In the citation network, the authors identified distinct topic-based clusters of researchers with backgrounds in information studies and historical literature; in linguistics; in statistical text analysis; in early concordance projects; and biotech influenced text analysis. In contrast, the co-retweet network exhibits grouping based on language and region, with clusters related to scholars in North America; in Australia; in the UK; and clusters with Francophonic, Germanophonic and Hispanophonic backgrounds.

The Twitter clusters are connected closely whereas clusters on the citation network are more loosely linked. This makes sense, as topics of study are generally more specific and less likely to change, whereas users on social media probably share a wider range of interests. The citation network is based on formal communications and it would take years to get sufficient citations to form links between two scholars. The Twitter network, however, is constructed by more informal interactions between users, and once two users retweeted the same tweet, they immediately build a link on the network.

By visualising both networks during different time periods, this study will also present the topics, disciplines, countries that are involved, and how the networks have been developed and formed over time. 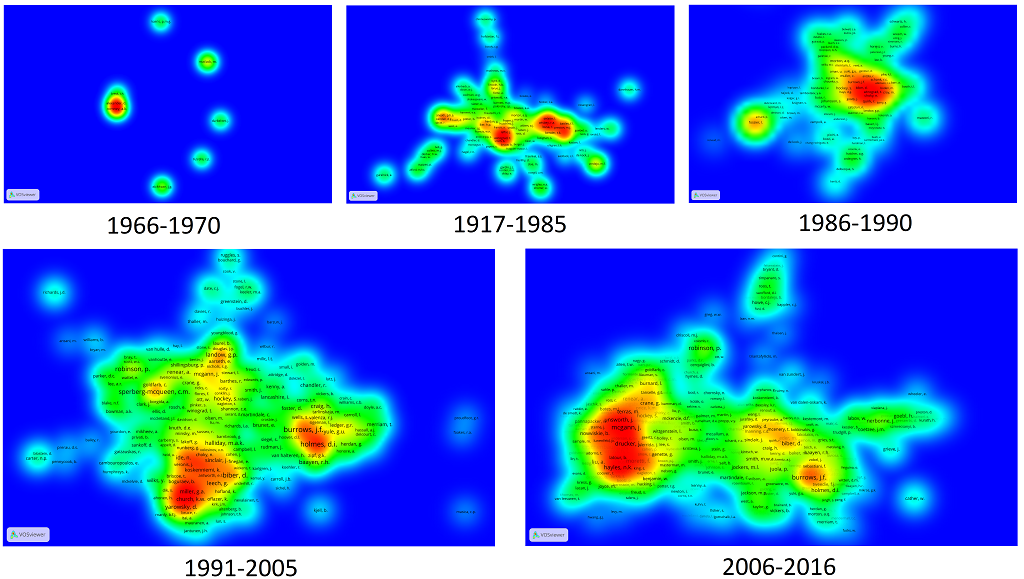 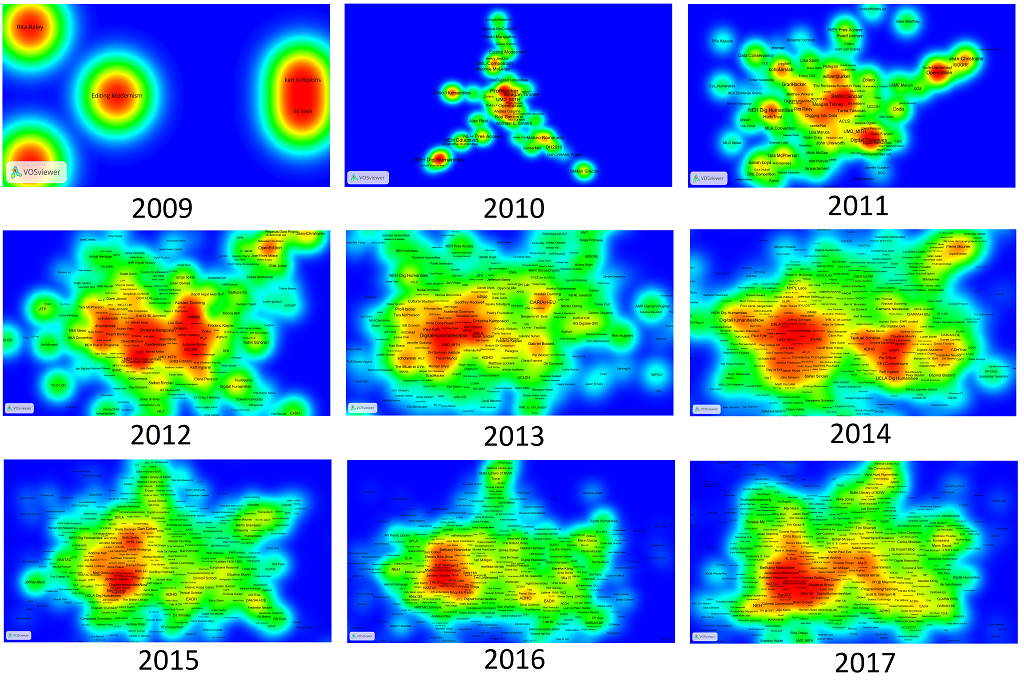 This study is not only the first to contribute to the DH history and community studies by visualising and comparing bibliometric and social networks, but also introduces new network approaches ( co-retweet) to study communications on social media that could support wider social network and data visualisation studies.

As we will discuss, network studies offer powerful but partial ways of studying the aspects of communities that are amenable to quantitative methods. We do not present the visualisations included in this paper as normative representations of the DH “community” or “communities”. Nevertheless, when used with caution, network studies can shed new light on important aspects of the historical formation of DH.

There are methodological limitations exist. For example, because the research subjects (cited authors and retweeting users) are not the same group of people (although with much overlap), obvious differences are expected. Besides, the citation lag time has been considered. Other practical methods to identify and study the DH Twitter communities can also be applied.